Picasso murals at heart of debate after Breivik bombing 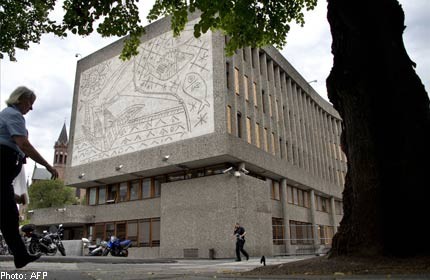 OSLO - Five Picasso murals that survived Anders Behring Breivik's bombing of an Oslo government block in 2011 are now at the heart of a divisive debate in Norway on the buildings' fate.

The murals drawn by the Spanish master in the late 1950s and 1960s - "The Beach", "The Seagull", "Satyr and Faun" and two versions of "The Fishermen" - risk being removed from the location for which they were conceived if the damaged buildings are torn down.

The government is currently mulling whether to demolish the structures or repair them.

Picasso's artwork adorns the concrete interiors and exteriors of two of the government buildings erected in central Oslo in the post-war period.

The murals, four of which were drawn specifically for the buildings and are done in a childlike style with simple geometric figures, were reproduced by Norwegian artist Carl Nesjar who sandblasted them into the concrete.

"If it were demolished it would lead to an international debate," he told daily Dagsavisen.

Breivik kicked off his July 22, 2011 rampage that led to the deaths of 77 people by setting off a van bomb at the foot of "H block". The blast killed eight people, ravaged the structure, and badly damaged several neighbouring ministries.

At the end of June, a panel of experts decided that the most economical solution would be to demolish four buildings in the government block, including "H block" and another ministerial building, "Y block" - the two that feature the five Picasso works.

The art itself would not be demolished, but cut up and used elsewhere.

But given the fact the murals were designed with the original architecture in mind, art experts and media commentators are against such a move.

Citing the historical importance of "H block", both architecturally, politically and artistically, the head of the Directorate for Cultural Heritage Joern Holme has called for it to be repaired.

"We can't demolish the best (parts) of a cultural era just because we find it ugly today," Holme said.

"That's not worthy of a cultural nation. Destroying the best thing that Norway did in a particular era of its history is contrary to all of our values," he added.

A severe-looking tower that is reminiscent, albeit on a smaller scale, of the UN headquarters in New York and designed by Norwegian architect Erling Viksjoe, "H block" never won over the hearts of all Norwegians.

A poll published in July in daily Verdens Gang showed that 39.5 per cent of people wanted to see it demolished while 34.3 per cent thought it should be kept.

"We now have a golden opportunity to get rid of this brutal, ugly and degrading architecture that has been erected in Oslo in the past 80 years," artist Dag Hol wrote in a comment in the daily Aftenposten last month.

"The architecture (of "H block") recalls more than anything else the dreariness, desolation and anthropophobia of communist eastern Europe and the Soviet Union," wrote Hol, who is not well-known among Norwegians but whose comments garnered much attention.

Furthermore, Picasso's family owns the rights to his works and has to be consulted on what happens to the murals.

"Picasso's works were created for this particular building. You can't just take them down like that, without asking," said Claudia Andrieu, a legal expert with the Picasso Administration.

"We have not been approached, which is both preferable and necessary," she added, underlining that the administration was "open to dialogue".

Norway's government is to decide early next year whether to repair the buildings, or partially or totally demolish them.