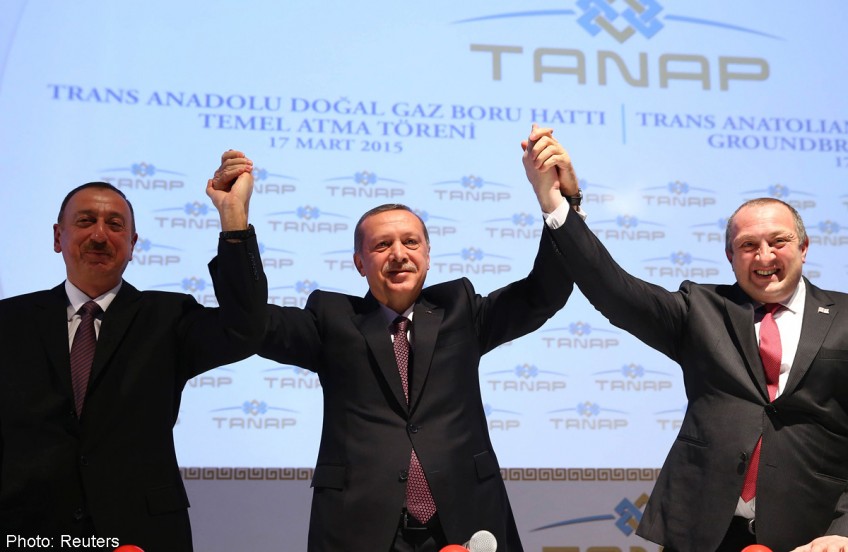 Turkey has staked a claim to become a major transit hub with two new pipelines to pump gas from Azerbaijan and Russia to Europe, but boasting may prove easier than fulfilling the ambitious projects.

At the same time Turkish and Russian officials are in intense negotiations to agree terms for a brand new Turkish Stream pipeline under the Black Sea. With the EU backing TANAP and Russia behind Turkish Stream, Turkey is now placed in a hugely strategic position in the intensifying rivalry between Brussels and Moscow over gas supply.

Turkey's dream is to turn the region on the western side of the country bordering Greece and Bulgaria into a gas hub, where multiple pipelines will meet to pump gas to EU consumers.

The EU-backed TANAP appears sure to be built, as finding returns on the $40-$45 billion investment in Azerbaijan's Shah Deniz 2 gas field depends on the pipeline. Turkish Stream however is a far less stable proposition.

Questions remain over whether Turkey has sufficient capacity to become a genuine gas hub, which requires far more than the building of pipeline infrastructure. "To be an energy hub there are a number of ingredients that are necessary, none of which exist as yet in Turkey," said Edward Chow, senior fellow at the Center for Strategic and International Studies (CSIS).

He pointed to the lack of a strong international banking system, a solid legal system to resolve normal commercial disputes and sufficient storage facilities. "Turkey has the advantage of location, it's near a lot of oil and gas producing countries.

Being a hub takes time," he said. The $10 billion TANAP project - whose construction was launched by President Recep Tayyip Erdogan and his Azerbaijani counterpart Ilham Aliyev - is firmly backed by the European Union which hopes it will help Europe reduce its dependence on Russian gas.

But analysts say Turkey will need to ramp up its total capacity from the initial plan of 16 bcma for it to make any major impact on the EU's goal of diversifying supplies away from the Russia of President Vladimir Putin.

"In the longer term if TANAP carries much more that will start to give it greater significance. That is something that will probably happen but will not be imminent," said Laurent Ruseckas, senior advisor in global gas at IHS Energy.

The plan to build Turkish Stream was dramatically announced by Putin in December in Ankara, as a replacement for the South Stream pipeline and to bypass Ukraine. Putin blamed the EU for the collapse of the South Stream project, which was to have come ashore in Bulgaria. But Russia and Turkey, who already operate the undersea Blue Stream pipeline, have yet to agree a final accord on Turkish Stream.

In exchange for agreeing to host the pipeline, Turkey secured from Russia a reduction on its own gas imports of 10.25 per cent, a welcome concession for a country with slowing growth and pressured currency.

Yet Russian daily Kommersant reported last week that the final negotiations had reached a "dead end' over the pricing terms. Turkish Energy Minister Taner Yildiz insisted however that the two sides were in agreement.

"I suspect this will happen but it is not ready to go yet, final agreements must be negotiated and signed between Gazprom and (Turkey's state energy firm) BOTAS," said Ruseckas.

Even once the agreements are signed, political will and financial backing will be needed to build the four pipelines required to create the envisaged capacity, which like South Stream is 63 bcma. "A one or two strand Turkish Stream is conceivable in my mind," said Chow.

"A 63 bcma system is hard for me to fathom any time soon," especially given the financial strains of Russian gas giant Gazprom and the pressure from Western sanctions over Ukraine, he said. One pipeline has a capacity of around 16 bcma.

Still the plan to build Turkish Stream is a sign of the strengthening relations between Russia and Turkey. The two have managed to prevent disputes over the Syria and Ukraine conflicts from damaging their emerging alliance.

While TANAP could be seen as a competing project to Turkish Stream, Erdogan with conspicuous timing telephoned Putin on the evening of the TANAP ceremony to discuss the Russian-Turkish pipeline plan, the Kremlin said.