Plague-era skeletons bring history back to life in London 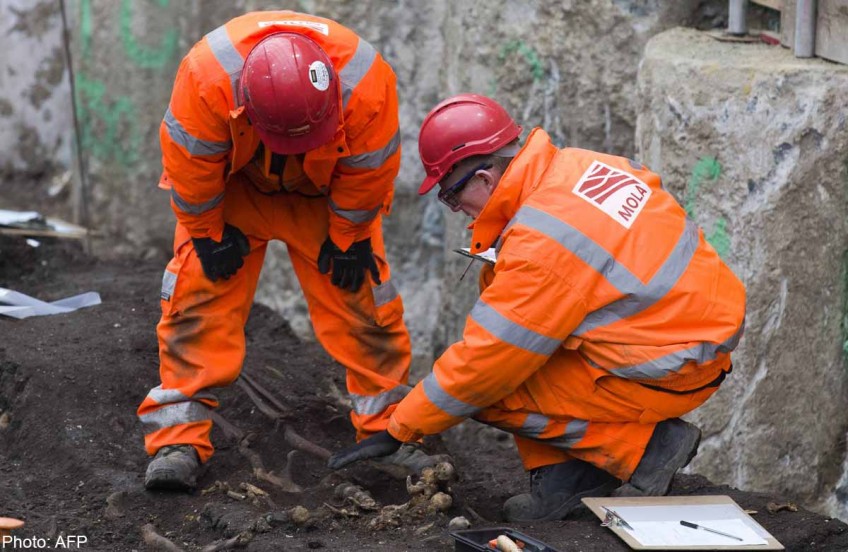 Archaeological personnel are pictured during excavation work at the Bedlam burial ground in London.

LONDON - London office workers are coming face-to-face with the history hidden beneath their feet, as 3,000 skeletons dating back to the 16th century are dug up to make way for a new railway line.

Between the glass and steel towers of the City of London financial district lies the Bedlam burial ground, the final resting place for thousands of people who died between 1569 and 1738.

As archaeologists carefully brush soil off the bones, bankers, lawyers and other professionals take time out from hitting deadlines and sealing deals to wonder about the area's past residents, who had to contend with plague, civil war and the Great Fire of London.

"I would have walked along this street so many times in years gone by -- walking on all this history," said Mark Bugeja, 48, who works at a management consultancy.

The Bedlam burial ground -- built on land bought from the nearby Bethlem psychiatric hospital, known as Bedlam -- was used as a graveyard for people who died during the Great Plague of London in 1665-66.

Londoners who could not afford a church burial, criminals and members of non-conformist religious movements were also buried there.

From 2018, the burial site will host the new ticket hall at Liverpool Street station for Crossrail, an east-west rail link scything its way across the city.

Before construction starts, archaeologists have a couple of months to excavate the skeletons.

As well as piecing together a microcosm of old London, they also hope that DNA from people who died of outbreaks of plague can be tested by researchers for clues about how to fight the disease.

A register published on the Crossrail website featuring 5,000 of the 20,000 people buried at the site helps piece together who the dead were.

James Lawson, a sketch maker buried in 1584, is said to have "died of thys new disease", thought to be the plague.

It also mentions a string of mysterious conditions unrecognisable to doctors of today, reflecting the poor state of medical science at the time.

Richard Wyttor, a grocer buried in 1583, "died of a burning jaw", while servant Raulfe Langworthe "died of a thoughte" and was laid to rest in 1610.

While it is almost impossible to put names to skeletons, Nick Elsden, dig project manager for Museum of London Archaeology, said there were clues to their identities.

"The bones can tell us a lot about how they lived -- anything from fractures to if they have got bow legs from rickets to signs of syphilis like skull lesions," he said.

"You can tell from wear patterns in bones if they did manual labour -- you can tell how difficult their life was, or how easy."

"It's a respectful process, you do become attached in some way," she added. "You feel you owe it to that person to look after them up to the point where they're reburied again."

The site's history does not stop at the 16th century -- below the roughly five metres of skeletons lie layers of older artefacts, some of which have already been uncovered.

These include an ice skate made of a cow's shin bone dating from the medieval period, when the area was marshland and used as a rink when it froze in winter.

In the next layer down, experts have found ancient Roman horseshoes, hairpins and burial urns from when the area was "Roman suburbia" lying just beyond city walls of Londinium, as the city was then known.

After being dug up, the Bedlam skeletons will be cleaned, dried, pieced together and examined.

They will eventually be reburied at a new site in Essex, east of London -- and the British capital's perpetual cycle of the past yielding to the future will roll on.