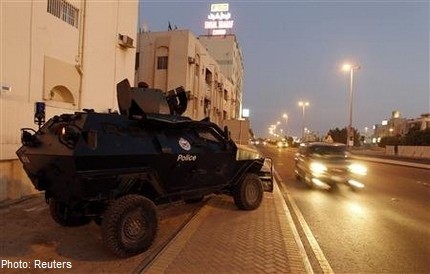 "Down with Hamad," hundreds chanted of King Hamad whose family has ruled the tiny Gulf kingdom for decades.

The protesters hurled stones and petrol bombs at policemen who responded by firing buckshot, tear gas, and sound grenades, the sources said.

The protests were held in response to a call issued by the opposition February 14 Coalition youth group.

"Security forces countered a terrorist group in (the Shiite village of) Bani Jamra and several members were arrested," the interior ministry on its Twitter account late Thursday.

Authorities usually use the term "terrorists" to refer to demonstrators.

Another "terrorist group had placed a homemade bomb in Bilad Qadim (another Shiite town) which exploded as they were attempting to plant it," said the ministry.

Long-simmering tensions in Shiite-majority Bahrain increased after opposition activists called for protests last Wednesday near the US embassy in Manama in defiance of a ban.

However, a massive deployment of troops has prevented the rally from going ahead, while witnesses have reported smaller protests in Shiite villages, where demonstrations are a regular occurrence.

At least 80 people have been killed since Arab Spring-inspired protests erupted in Bahrain in early 2011, according to the International Federation for Human Rights.

Hamad issued an amendment this month to the country's law on public gatherings, banning protests in the capital. He also decreed stiffer penalties for "terror acts."

Strategically located across the Gulf from Shiite Iran, Bahrain is home to the US Navy's Fifth Fleet and is an offshore financial and services centre for its oil-rich Arab neighbours in the Gulf.