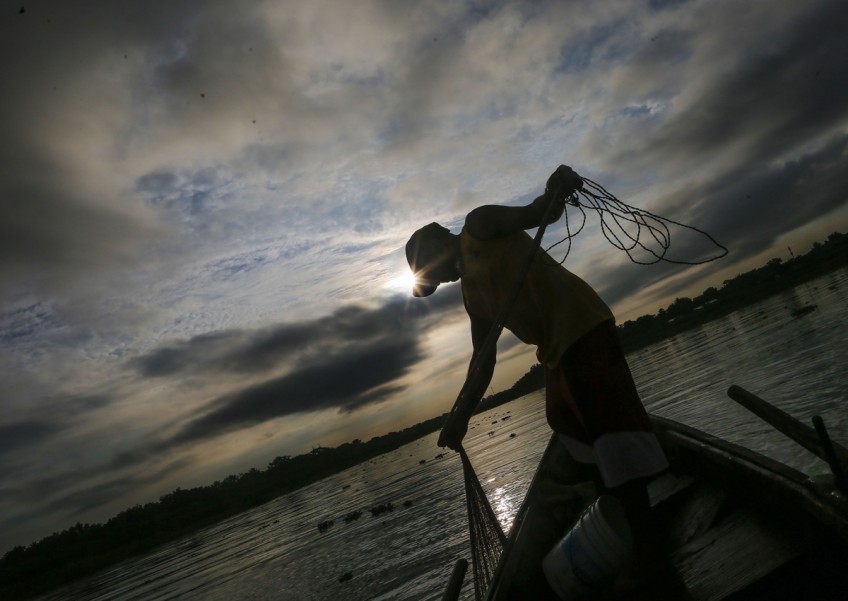 A fisherman throws his net into the polluted waters of Xolotlan Lake, also known as Managua Lake, in the town of Tipitapa, about 25km northeast of the Nicaraguan capital Managua, on September 26, 2017.
AFP

TIPTAPA, NICARAGUA - Looking tired and haggard, William Coronado pulls up before dawn with a boat full of fish on the muddy shore of Nicaragua's Lake Managua, a dumping ground for trash and waste.

"The lake is so polluted. They throw all sorts of crap into it," said the 56-year-old. "Containers, old buckets, all sorts of bags - all the junk they throw away in Managua. It's a disgrace."

Coronado spent two days under the Central American sun and windy nights to bring in a haul of hundreds of tiny two-banded sea bream and other freshwater fish, to sell them for $1.30 (S$1.80) per dozen to a business just north of the capital Managua.

His wife Rosa waits for him in a rickety house built of tin and plastic located just 300 meters (yards) from the lake, living in extreme poverty like most of the neighbours.

Lake Managua, also known as Lake Xolotlan, is one of the biggest freshwater bodies in Central America.

It is also one of the most polluted, a problem that started nearly a century ago.

Between 1967 and 1992, a US chemical company, Pennwalt, regularly dumped mercury into its depths. From 1927 to 2009, the capital, which sits on the lake, tipped its untreated sewage and factory outflows into the lake.

Eight years ago, the government finally opened a treatment plant financed by German funding and the Inter-American Development Bank.

Since then, the pollution has eased, the bad odours have lessened, and the lake has become a tourist attraction.

But the former head of the state water company, Ruth Herrera, warned that it could take another 100 years before the expanse of water is finally clean - maybe longer, if residents continue to tip their garbage into it.

Health authorities in the country are still warning pregnant women to avoid eating fish caught in the lake to prevent their babies developing disorders such as mental retardation or stunted growth due to the high mercury levels.

A study carried out last year by the Autonomous University of Nicaragua, with backing from Japan, found that the guapote freshwater fish from Lake Nicaragua had 0.46 micrograms of mercury per kilo, above the authorised level of 0.40.

Other species of fish had lower levels, and most of the lake has trace levels of mercury.

"Maybe these fish have low levels, but over the long term, the population could have health effects if it eats them," cautioned Jurguen Guevara of Centro Humboldt, an environmental group.

Herrera also advised against eating fish from the lake, although she suggested that the estimated 100,000 mostly poor people living around its shores might have developed some sort of resistance to illnesses by eating the fish.

"We eat fish from there every day and nothing has happened to us," affirmed Ofelia Ramirez, from a village called Tipitapa.

But the locals have little choice: they are among the one-third of Nicaragua's population living under the poverty line, and the lake represents their only source of work and sustenance.

Dozens of fishermen can be seen sailing in the middle of the night in small boats made of fiberglass or wood, pulling up nets cast in the lake.

"We bring back around 20 dozen" fish every day, said Juan Ramirez, a 30-year-old setting off in a canoe with his two children to help him fish the lake's waters.