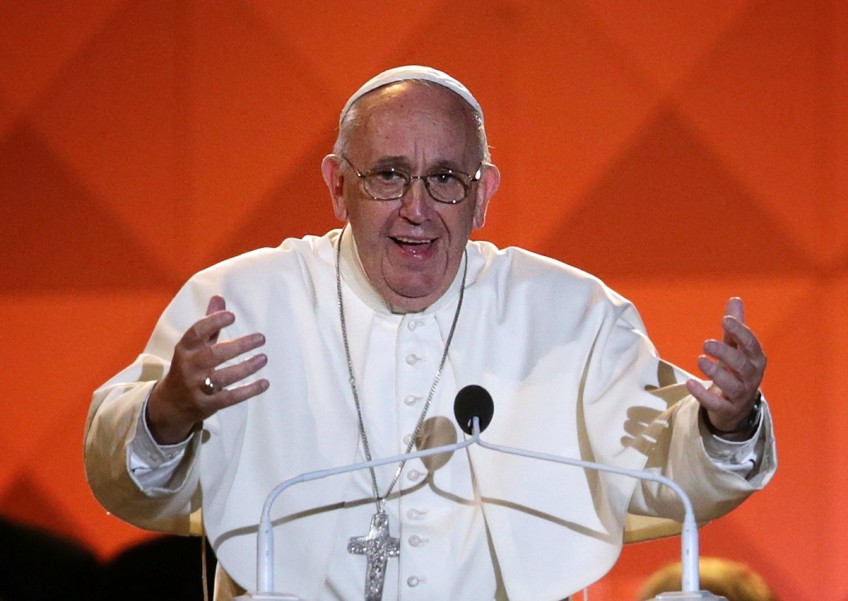 Pope Francis speaks at the Festival of Families in Philadelphia September 26, 2015.
Reuters

PHILADELPHIA - Pope Francis addressed a festival of families attended by tens of thousands of Catholics, offering a frank assessment of the difficulties of life and a prescription for love on the penultimate day of his US tour.

The 78-year-old Argentine pontiff rode through downtown Philadelphia waving to ecstatic crowds, after endearing himself to American Catholics with speeches about the importance of women and immigrants.

He ended the night on stage at the Festival of Families, a Catholic event held once every three years, for a star-studded night of music and prayer.

Gospel superstar Aretha Franklin and Italian opera singer Andrea Bocelli were among those who performed.

An African American boy gave such a beautiful rendition of Pie Jesu that it earned him a gift from the pontiff.

Francis then took to the stage to speak directly to those gathered in the crowd: grandparents, struggling couples and children.

"Families quarrel and sometimes plates can fly and children bring headaches, and I won't speak about mothers-in-law," said the pope in an off-script speech laden with jokes lapped up by the crowd.

"But those difficulties are overcome with love," he said in words of wisdom woven with a common touch, in the style that has endeared him to an even wider audience than the world's 1.2 billion Catholics.

"Never let the day end without making peace," said Francis, the first pope from Latin America and the first drawn from outside Europe.

The pope has received a rapturous reception in America. He was welcomed personally by President Barack Obama when he arrived on Tuesday and by giant crowds lining the streets of both Washington and New York.

Hundreds of lawmakers offered him repeated standing ovations in the US Congress, but he also reveled in visits with the homeless in Washington and schoolchildren in New York's East Harlem neighborhood.

His reform-minded approach to social issues, humility and focus on the most vulnerable has struck a chord across the country's racial and socioeconomic divide.

At Saturday's Festival of Families, six families from around the world were invited onto the stage by Hollywood actor Mark Wahlberg, who served as master of ceremonies, to share their experiences.

Among them was a family from Ukraine with a 17-year-old handicapped son who emigrated to America and told of struggling every day.

After the mother's impassioned speech, the pope got out of his chair to embrace her son in a wheelchair.

Catholics from around the world, America and Philadelphia residents drawn to the hugely popular pope camped on streets overnight or spent the day in the sun waiting for a glimpse of Francis.

"I love his gentleness and his strength," said Eileen Smith, a retired social worker and teacher.

"I love the energy. It makes me proud to be from Philadelphia and to be an American." The City of Brotherly Love is under a security lockdown, with traffic banned downtown for the entire weekend and thousands of National Guardsmen in the streets to corral throngs of faithful hoping to see the pontiff.

At Independence Hall, where the Declaration of Independence and the US Constitution were debated and signed, Francis told tens of thousands that religious freedom must be protected - and be used for the greater good.

"It is a fundamental right which shapes the way we interact socially and personally with our neighbours whose religious views differ from our own," the pope said.

A debate over religious freedom in America came to a head this month when a Kentucky county clerk was jailed after refusing to issue marriage licenses to same-sex couples, saying it violated her religious beliefs.

Himself the son of Italian immigrants, he touched on another raging debate in contemporary America: how immigrants fit into US society, and how far the US should open its borders to them.

"Many of you have emigrated to this country at great personal cost, but in the hope of building a new life. Do not be discouraged by whatever challenges and hardships you face," he said, speaking in Spanish.

Francis flew into Philadelphia from New York, giving a sermon at the Cathedral Basilica of Saints Peter and Paul, where he singled out the "immense contribution" women have played in the Church.

He also called for more active engagement on the part of the laity.

Keeping parishioners involved is important as the number of new priests only covers a third of the need in the United States, according to the Center for Applied Research in the Apostolate at Georgetown University.

On Sunday in Philadelphia, Francis will meet with American bishops, visit a prison and lead a farewell mass on Benjamin Franklin Parkway, the city's grandest avenue, before leaving the United States.