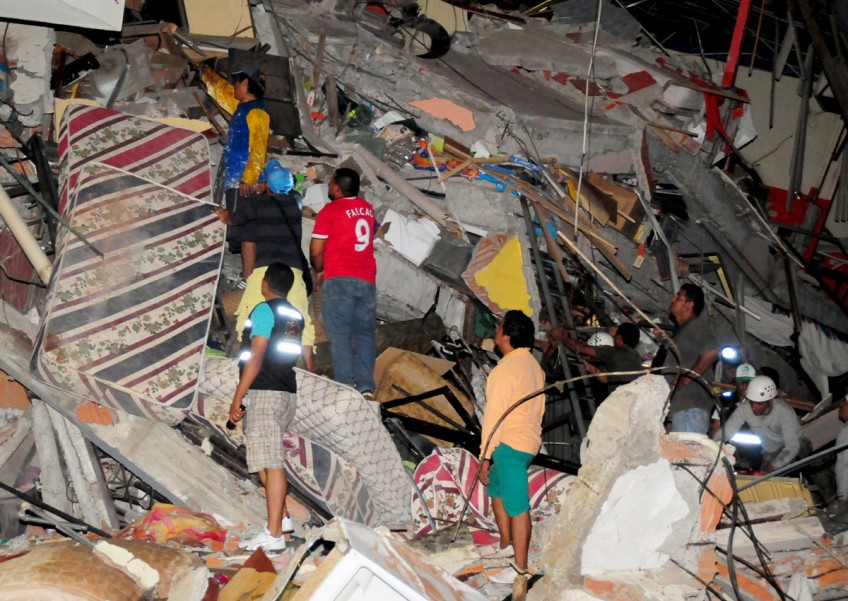 At least 77 people were killed when a powerful 7.8-magnitude earthquake struck Ecuador, destroying buildings and a bridge and sending terrified residents dashing from their homes, authorities in the Latin American country said Sunday.

"Oh, my God, it was the biggest and strongest earthquake I have felt in my whole life. It lasted a long time, and I was feeling dizzy," said Maria Torres, 60, in the capital Quito, which was rocked by the late Saturday quake.

"I couldn't walk... I wanted to run out into the street, but I couldn't." The quake, which struck at 2358 GMT about 170 km northwest of Quito, lasted about a minute and was felt across Ecuador, northern Peru and southern Colombia.

Vice President Jorge Glas said the death toll will likely rise further in what he called the "worst seismic movement we have faced in decades." "At this moment, the number of confirmed deaths has reached 77," Glas said early Sunday, adding more than 588 people were injured.

A state of emergency was declared in the six worst-hit provinces.

Police, the military and the emergency services "are in a state of maximum alert to protect the lives of citizens," Glas said.

President Rafael Correa, on a visit to the Vatican, wrote on Twitter that he was immediately returning to Ecuador.

In the Pacific port city of Guayaquil, home to more than two million people, a bridge collapsed, crushing a car beneath it, and residents were picking through the wreckage of houses reduced to heaps of rubble and timber, an AFP photographer reported.

Ecuador's Geophysical Office reported "considerable" structural damage "in the area near the epicenter as well as points as far away as Guayaquil." The US Geological Survey (USGS) said the 7.8-magnitude shallow quake struck off the northwest shore of Ecuador, just 27 kilometers from the town of Muisne.

Ecuador lies near a shifting boundary between tectonic plates and has suffered seven earthquakes of magnitude 7.0 or higher in the region of Tuesday's quake since 1900, the USGS said. One in March 1987 killed about 1,000 people, it said.

At least 55 smaller aftershocks rattled the country after the main quake, Glas said.

The Hawaii-based Pacific Tsunami Warning Center initially issued a warning for the nearby Pacific coastline but later said that the threat had largely passed.

The tremor knocked out electricity in parts of Quito. Authorities did not immediately report injuries there though media showed pictures of damaged shops.

In the north of the city, people ran out of their homes in terror, as power lines swayed back and forth and cables danced.

Cristina Duran, 45, grabbed her three pets and stood under a large doorway to avoid shards of glass falling from shattered windows.

"I was frightened. And I just kept asking for it to be over," she told AFP.

Authorities closed the airport in the western city of Manta, saying the control tower suffered "severe damage." President Correa, interviewed by phone on Radio Publica, called for "calm and unity." Correa said that rescue teams were flying in from Mexico and Colombia to help search for quake victims and expressed solidarity with the families of the deceased.

At Guayaquil airport, passengers awaiting flights ran out of the terminals when they felt the ground shake.

"Lights fell down from the ceiling. People were running around in shock," said Luis Quimis, 30, who was waiting to catch a flight to Quito.

Guayaquil resident Carlota Lopez said that she was in a car when the earthquake struck.

"The power lines were swaying wildly, and I was afraid that the lines or the street lights would fall on the car," she told AFP by phone.

Lopez said it felt "as if the car was being shaken with great strength" by people outside the vehicle and that there was a power outage immediately afterwards.

The quake was also felt in northern Peru and a large section of southern Colombia, according to authorities in those countries, although no casualties were reported. Peruvian officials however urged coastal residents to stay away from the beach.