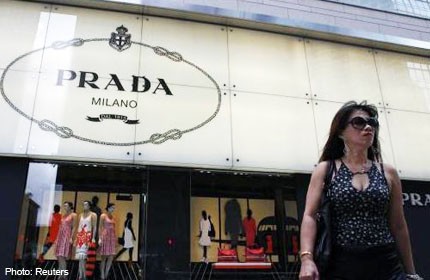 MILAN - Italian fashion house Prada appeared to brush off luxury industry concerns about slowing growth in China, saying demand from the country helped to drive an 11.6 per cent rise in sales for the six months ended July.

Luxury goods firms including Germany's Hugo Boss and France's Kering have warned of cooling demand from China, which until recently had been the engine of strong growth in the sector.

However, Prada on Thursday singled out the "significant contribution" made by Greater China to a 17.7 per cent rise in sales in its Asia Pacific region.

Preliminary group sales for the first half of its financial year totaled 1.73 billion euros ($2.3 billion), just below analyst estimates around 1.75 billion euros.

Like-for-like retail sales growth slowed to 7 per cent over the half from 8 per cent in the first quarter, hit by a reduction in markdowns during July sales and a late Ramadan which affected Middle Eastern business, Goldman Sachs analysts said in a note.

"Once we factor in one-offs, we believe the results show Prada's brand momentum (including the new store productivity) remains very healthy," they said.

Prada said 5.7 per cent sales growth in recession-hit Europe was boosted by a high number of tourists.

The group, which has announced five store openings around the world since the beginning of July, said it would press ahead with its overseas growth drive.

"We shall continue to base our long term growth strategy on the balanced international expansion of our retail network,"Chief Executive Patrizio Bertelli said in a statement.

Prada's newly inaugurated retail outlets in Milan, Italy, and Seoul, South Korea, are dedicated to its men's collection, while its first shop in Doha, Qatar, and its first freestanding store in Japan sell its men's and women's clothing, leather goods, accessories and footwear.

Sales rose 3.7 per cent in the first half at chairwoman Miuccia Prada's namesake Miu Miu brand.

"Miu Miu achieved stronger growth than in (first quarter) which we are really pleased about," Bernstein analysts said.