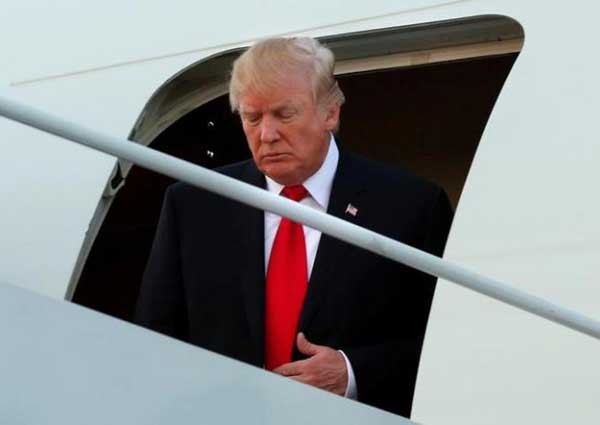 US President Donald Trump arrives at Joint Base Andrews, Maryland, US, upon his return to Washington after a weekend at the Trump National Golf Club in Bedminster, New Jersey, on July 3, 2017.
Reuters

During his presidential campaign, Republican Donald Trump praised Russian President Vladimir Putin as a "strong leader" with whom he would like to reset tense US-Russian relations.

But as Trump heads to his first face-to-face meeting as president with Putin on Friday at the G20 summit in Germany, he is under pressure at home to take a tough line with the Kremlin.

Allegations of Russian meddling in last year's US election have alarmed both Republican and Democratic lawmakers, who are pushing to extend tough sanctions placed on Russia following its 2014 annexation of Crimea, a peninsula belonging to Ukraine.

Lawmakers including Republican Senator Cory Gardner are also concerned Russia has prolonged the civil war in Syria by backing its President Bashar al-Assad, a strongman whose forces have used chemical weapons against insurgents and civilians.

The chaos has fueled instability in the region and a flood of migrants to Europe.

"President (Trump) needs to make it clear that the continued aggression by Russia around the globe ... is unacceptable, and that they will be held accountable," said Gardner, who was among six lawmakers invited by the White House last month to discuss foreign policy with Trump over dinner.

Meanwhile, the appointment of a special counsel who is investigating potential links between the Russian government and members of the Trump campaign has weakened the president's ability to manoeuvre with Russia, foreign policy experts say.

Russia has denied those allegations while Trump has repeatedly dismissed the idea of any coordination between his campaign and Russia as a "witch hunt."

"If (Trump) smiles, if he wraps his arm around Putin, if he says, 'I'm honoured to meet you, we're going to find a way forward,' ... I think Congress is going to react extremely negatively to that," said Julie Smith, a former national security aide in the Obama administration.

Trump has signaled an interest in cooperating with Russia to defeat Islamic State in Syria and to reduce nuclear stockpiles.

The White House has been mum on what Trump would be willing to give Russia in exchange for that help.

But there has been speculation he could ratchet down sanctions, or even return two Russian diplomatic compounds in Maryland and Long Island. President Barack Obama seized those facilities and expelled 35 Russian diplomats just before he left office as punishment for the election hacks.

While some administration officials, including Secretary of State Rex Tillerson, also support engagement, others, such as Vice President Mike Pence and US ambassador to the United Nations Nikki Haley, have taken a hawkish line on Russia.

The lack of a unified strategy has left US allies anxious. And it has lowered expectations for American leadership to help resolve crises in Syria and Ukraine, where Russian co-operation would be critical.

"Trump is like a horse with his front legs tied," said a German diplomat, who spoke to Reuters on condition of anonymity.

"He can't make any big leaps forward on Russia. If he tried people would immediately suspect it was all part of some big conspiracy."

Trump's administration is still reviewing its Russia policy, a process that may not be wrapped up for a couple of months, a US official said.

Speaking with reporters last week about Trump's upcoming meeting with Putin, White House national security adviser H.R. McMaster said his boss would like "the United States and the entire West to develop a more constructive relationship with Russia.

But he's also made clear that we will do what is necessary to confront Russia's destabilizing behaviour."

THIRD TRY AT A RESET

Trump is just the latest president to grapple with the complicated US-Russia dynamic.

George W. Bush and Obama sought to improve the US relationship with Russia early in their administrations only to see relations deteriorate later.

Among the concerns for this president is Trump's apparent lack of interest in policy details and his tendency to wing it with foreign leaders.

McMaster told reporters that Trump has "no specific agenda" for his meeting with Putin and that topics would consist of "whatever the president wants to talk about."

Michael McFaul, who was US ambassador to Russia under Obama, said he feared Trump might be headed to the meeting without clear objectives.

Other Washington veterans say Trump won't be able to make meaningful progress with Russia on anything until he confronts Putin about the suspected election meddling.

"(Trump) really has to raise the Russian election hacking last year, and has to say something like, 'Vladimir, don't do this again. There will be consequences,'" said Steve Pifer, a long-time State Department official focused on US-Russia relations.

So far Trump has shown little inclination to do so, a situation that has heightened speculation about the potential impact from his coming encounter with the Russian leader.

"The shadow of all these investigations hangs over this," said Angela Stent, a professor at Georgetown University and former National Intelligence Officer for Russia.