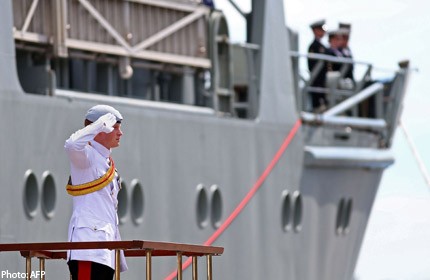 Britain's Prince Harry stands and salutes as he arrives at Garden Island in Sydney to attend the 2013 International Fleet Review.

SYDNEY - Britain's Prince Harry, in full military uniform, reviewed a global armada of warships in a day of pomp and ceremony watched by tens of thousands of people on Sydney Harbour Saturday.

Captain Wales, as he is known in the British military, was on his first official trip to Australia to take part in a nautical extravaganza marking the centenary of Australia's emergence as an independent sea power.

Ayesha Sweeney, 19, travelled 460 kilometres (287 miles) from the rural town of Albury to see the prince and she managed to catch of glimpse of him as he saluted officers at Sydney naval base Garden Island.

"His uniform was really cool, his salute was awesome," Sweeney said.

"He's a bit of a cutie, I think everyone has a crush in him - all of the ladies were wooing and whistling when he came out."

In brilliant sunshine, the Leeuwin was reviewing an armada of warships from 17 countries, along with as many Australian vessels, watched by crowds of onlookers cramming vantage points around the harbour and an estimated 5,000 spectator boats.

The flotilla is part of celebrations to commemorate 100 years since the Royal Australian Navy's fleet first entered the city's waters.

It was on October 4, 1913 that seven Australian warships, led by HMAS Australia, first steamed into Sydney to be met by huge crowds, heralding the country's independent sea power and emergence as a modern nation.

Until then, the Australian colony had been watched over by British vessels.

The prince is also expected to hold a meet-and-greet with the public and attend an official function with Abbott at his Sydney residence Kirribilli House, on the harbour opposite the Opera House, before heading to Perth for a brief visit.

Sydney is playing host to a week of maritime celebrations, including aircraft fly-pasts, helicopter display teams, marching bands and firework displays, with many of the visiting ships, from countries including Britain, Singapore, Japan and the United States, open to the public.