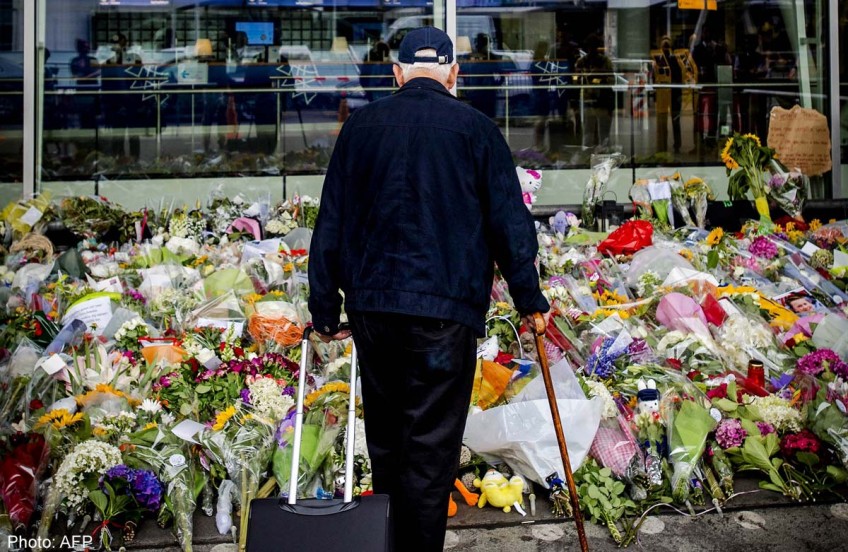 A man looks at the flowers left in remembrance for the victims of the MH17 plane crash at Schiphol Airport, near Amsterdam, on July 21.

MOSCOW - A chorus of Kremlin-friendly media declared on Monday that the truth about what happened to the Malaysian jet would likely never be found out, accusing the West of heaping the blame on Russia.

"Western press already knows who is to blame for the loss of the airliner - Russia obviously," said popular tabloid Komsomolskaya Pravda.

Mass-circulation Moskovsky Komsomolets accused the West of pinning the blame on Russia before the results of a yet-to-begin investigation are out.

"Those guilty have been designated," it said, recalling that the United States had falsely accused dictator Saddam Hussein of having weapons of mass destruction in the run-up to the 2003 invasion of Iraq.

"It is unclear whether it is possible to tell the truth from the lies in this wonderful new information world," Moskovsky Komsomolets added.

Government newspaper Rossiiskaya Gazeta pointed the finger squarely at Kiev authorities, accusing them of refusing to cooperate with Moscow.

"Kiev is not in a rush to answer '10 questions' about the Boeing," it said, referring to a litany of queries released by the Russian defense ministry over the weekend.

Broadsheet newspapers took a more measured approach, saying the disaster ushered in a grim new era in ties between Russia and the West.

"The catastrophe not only in the skies but also in relations between Russia and the West," said Nezavisimaya Gazeta.

"The wreckage from the Boeing is falling on Russia," added Kommersant daily, noting that the outcome of the inquiry into the crash will determine the future of Russia's ties with the West.

The newspaper cited analyst Alexander Golts as saying that if probe results end up pointing the finger at Moscow, it would once again be perceived in the West as an "Evil Empire." But if the investigation proves the jet was shot down by Ukraine, Kiev would lose Western support, the expert was quoted as saying.

Liberal daily Vedomosti said it was not too late for Russia to mend fences with the West.

"Russia should start rebuilding trust in ties with Europe," it said.

"Much has become irreversible but precise and responsible steps can still point to a path of mutual understanding."

And Novye Izvestia featured on its front page a poem by prominent poet Yevgeny Yevtushenko saying all parties were to blame for the death of 298 people on flight MH17.

"And I am crying, your unnamed brother/ Forgive me for this. I am guilty."