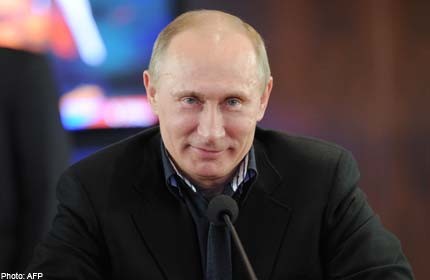 MOSCOW - Russian President Vladimir Putin on Tuesday signed a law plunging the country into permanent winter time in the latest experiment with the nation's alarm clocks after three years of non-stop summer time.

Putin signed amendments to the law "on measuring time" putting the country on "constant winter time" from this autumn, never again to switch over to summer time.

From October 26, Moscow will be permanently on GMT plus 3.

Under the new law, "seasonal changing of clocks is not being carried out," the Kremlin announcement said.

Putin's predecessor Dmitry Medvedev had moved the country to permanent summer time in 2011, saying this would make life better for "unlucky cows" who have to adapt to being milked an hour later.

Many Russians disagreed, however, unhappy about getting up an hour earlier every day through long dark winters.

The new law was proposed by the health committee of Russia's lower house of parliament, which claimed a dire toll on public health from the prolonged period of summer time.

The health committee said medical tests had noted "the worsening of the nation's health due to the biological rhythms of the body getting out of synch with the new system of timekeeping." The new law will "help reduce illness and death rates long-term and have a positive effect on the tempo of economic growth," the authors said.

In a humiliating dismantling of one of Medvedev's most high-profile reforms, Russia also goes back to 11 time zones, after cutting them down to nine in 2011 by merging several zones.