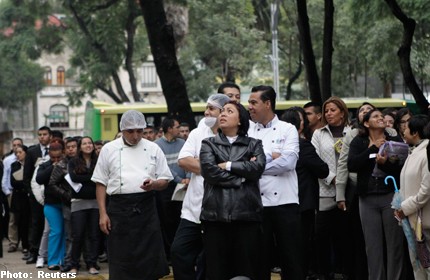 People including employees evacuate and wait outside their building after an earthquake in Mexico City August 21, 2013.

MEXICO CITY - A strong 6.0 magnitude earthquake and an aftershock rattled Mexico on Wednesday, causing evacuations of buildings in the capital and hotels in the Pacific resort of Acapulco.

Authorities said the twin temblors had not caused immediate damage.

The earthquake struck as people prepared to head to work and school, with it epicenter located 17 kilometers (10 miles) west of the town of San Marcos in the southern state of Guerrero, the National Seismology Center said.

A 5.62-magnitude aftershock was reported 20 minutes later 14 kilometers northeast of Acapulco, where rocks from a hill rolled into a street and some hotel facades showed cracks while tourists poured into the streets.

Mexico City's quake alert was activated while hundreds of people were evacuated from buildings and authorities surveyed the megalopolis for any damage or injuries.