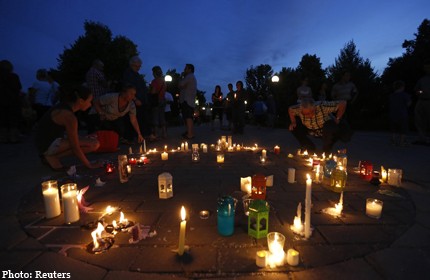 LAC-MEGANTIC, Canada - A week after their town was devastated by one of the worst train accidents in Canadian history, residents of Lac-Megantic, Quebec, began commemorating their dead, holding a tearful candlelight vigil and tolling the bells of the local church.

Dozens of people from the town and area gathered at the Paroisse de Ste-Agnes church on Friday evening to pray and remember an estimated 50 people killed after a train hauling crude oil jumped the track and exploded into flames there last Saturday.

The recently reopened church has become a centre of mourning for the small community, with residents leaving flowers, pictures, notes and other mementos.

Dominique Bordeleau, a high school teacher attending the vigil, said she recognised two of her former students among the dead whose photos were placed in the church's shrine.

"It really sinks in what happened when you see these pictures. It reaches deep into you. It's devastating," she said.

The vigil was smaller than originally expected after Mayor Colette Roy-Laroche pleaded with out-of-towners not to come into Lac-Megantic, saying it would overwhelm a community still under a state of emergency.

Instead, candlelight vigils were held in communities across the predominantly French-speaking province.

Another tribute to the dead and missing was planned for Saturday at noon, when the bells of Paroisse Ste-Agnes will be rung 50 times.

Even as residents paused to remember, police and emergency officials continued the complex task of looking for bodies and identifying them.

Authorities working in the town's restricted red zone have recovered 28 bodies so far, eight of which have been identified. Another 22 people are presumed dead.

But the work has been made more difficult by the abundance of crude oil on the site, which unleashes harmful fumes to workers when displaced.

"We had to slow our searches in the field because of many factors, including air," said Michel Forget, an inspector with Surete du Quebec, the provincial police force.

The force is looking at ways to improve ventilation, a move it hopes will speed up the process. The Surete said investigators from the police forces of Montreal and Quebec City had arrived, a move he said would accelerate the process.

The town is showing small signs of a return to normalcy. On Friday evening the summer weather brought many people back onto the quaint streets and outdoor patios that have helped make Lac-Megantic a popular tourist destination.

But emotions remained raw in the tight-knit community, where everyone seems to know each other through at least one degree of separation.

On Friday, one distraught woman interrupted a press conference given by the police shouting, "What is it you want to know? We're in pain. We're in pain."