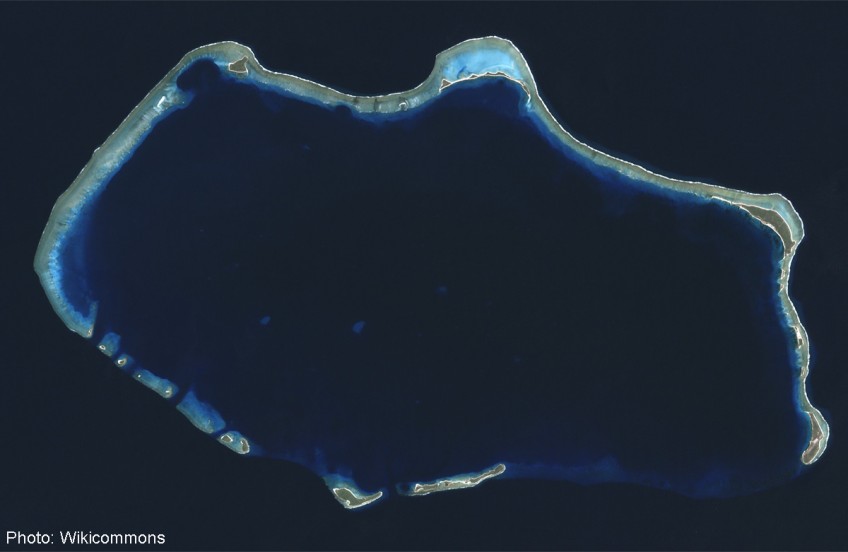 Bikini Atoll after the nuclear testing.

A tiny central Pacific community, forced to evacuate their homes because of US nuclear testing, are now demanding refuge in the United States as they face a new threat from climate change.

"We want to relocate to the United States," Nishma Jamore, mayor of the atoll of Bikini, said on the weekend as Pacific waters continued to eat away at the small Kili and Ejit islands in the far-flung Marshall Islands archipelago.

Jamore heads a community of about 1,000 islanders who have lived in exile on the islands for decades because their original homeland of Bikini remains too radioactive for resettlement.

There were 24 nuclear tests conducted on the atoll in the 1950s, including "Bravo", the largest hydrogen bomb detonation conducted by the United States.

Unable to return to Bikini, the islanders are now faced with increasingly heavy flooding from high tides and storms hitting Kili and Ejit with waves washing over the islands and wiping out food crops.

Jamore voiced their concerns to US Assistant Secretary of Interior Esther Kia'aina during her visit to the Marshall's capital of Majuro this month.

"We want to relocate to the United States," Jamore said. "Kili has been repeatedly flooded since 2012 and we've asked the Marshall Islands government for help with no response."

There is also serious concern over a recent legislative move by the Marshall's parliament, known as the Nitijela, to take authority for Ejit Island away from the Bikinians.

The latest flooding at Kili hit last month during annual high tides, and Jamore described the island's airport runway as like "the Nile River" as water flooded over it.

As the floods damaged houses and damaged crops, the 1.6 kilometre (one mile) long runway, which is 2.5 metres (8.2 feet) above sea level, disappeared beneath about 25 centimetres of saltwater. This is the second time Bikini Islanders have called to be resettled in the United States.

In the 1980s, following an aborted resettlement on Bikini atoll that ended with the islanders exposed to high levels of radiation, they attempted to buy a tract of land on Maui in the state of Hawaii for resettlement.

The plan was vetoed when it ran into considerable opposition from Maui residents, but it is gathering steam again because of the damage to homes and agriculture caused by repeated flooding of Kili and Ejit in recent years.

"We're going to Washington next month," Jamore said, insisting he would take the plan to the US government. Arkansas, Oklahoma and Hawaii have been identified as ideal locations as they are already home to significant populations of Bikini islanders.

Jamore and other Bikini Council executives want to use the US-funded Bikini Trust Fund to purchase property for the resettlement.

Currently the Fund allows for property purchase only in the Marshall Islands, but Jamore said they have asked the Interior Department to change the agreement so they can buy land in the United States. "This will give the people options for education and jobs," he said.