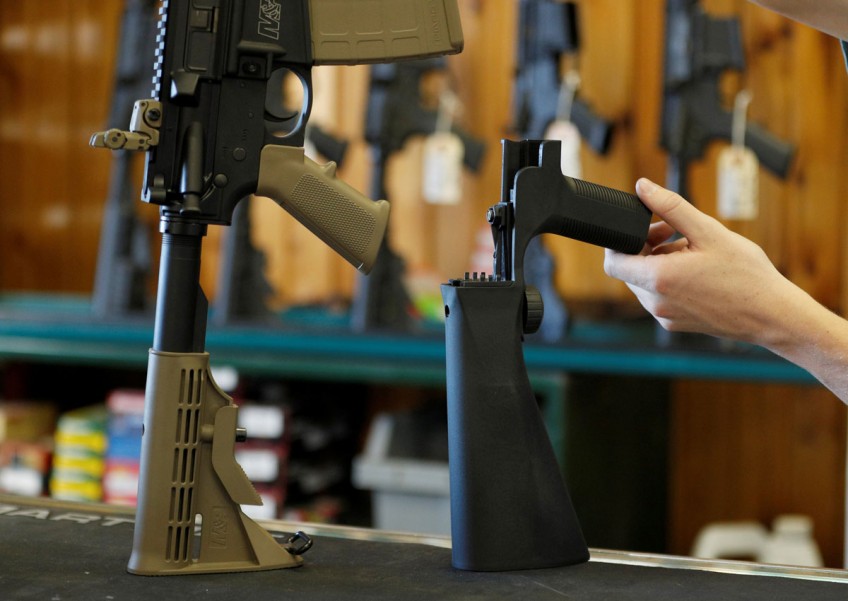 A bump fire stock, (R), that attaches to a semi-automatic rifle to increase the firing rate is seen at Good Guys Gun Shop in Orem, Utah, U.S., October 4, 2017.
Reuters

Washington - The NRA said Thursday that "additional regulations" should be imposed on devices used to convert the Las Vegas shooter's rifles into rapid-fire weapons, breaking with its usual outright opposition to gun control efforts.

The National Rifle Association called on US authorities to "immediately review whether these devices comply with federal law," NRA leaders Wayne LaPierre and Chris Cox said in a statement.

"The NRA believes that devices designed to allow semi-automatic rifles to function like fully-automatic rifles should be subject to additional regulations." The statement could be seen as a key shift by the powerful pro-gun group, which has vehemently opposed any efforts at gun control.

The White House also announced it was "open" to congressional debate about the so-called bump stocks, spring-loaded devices which keep the weapon firing using its own recoil, shooting hundreds of rounds per minute.

"We welcome that and would like to be part of that conversation." The announcements could give cover to Republican lawmakers, many of whom receive campaign finance support from the hugely influential gun lobby, to back current legislation that would ban the sale or possession of such devices.

Several Republicans, including House Speaker Paul Ryan, have said they support looking into the issue, with some saying they could back efforts to restrict or ban the devices.

Republican Senator Lindsey Graham said the bump stock "defies the spirit of the law against automatic weapons." Despite its rare endorsement of a gun device restriction, the NRA insisted in its statement that its goal firmly remained the protection and strengthening the Second Amendment right to bear arms.

"Banning guns from law-abiding Americans based on the criminal act of a madman will do nothing to prevent future attacks," LaPierre and Cox said.