LOS ANGELES - Deep within Lucasfilm's San Francisco headquarters, a group of elders act as a real-life Jedi Council - keepers of sacred knowledge who police everything that happens in the "Star Wars" universe.

Their job is to make sure every movie, animated television show, novel, guidebook, comic and video game is part of one, big, internally-consistent story.

Known as the "Lucasfilm Story Group," this cabal of around a dozen experts maintains a meticulously detailed database of "Star Wars" lore, from major plot points to the tiniest specifications on a spaceship never seen on camera.

"A lot of what we do, and what I do specifically, is basically keeping track of 'Star Wars' as a real place with a real history," said creative executive Pablo Hidalgo, sometimes referred to as the "Yoda of Lucasfilm." 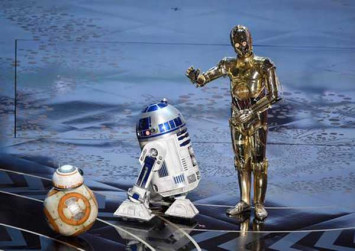 "And then we see what that gets you as far as storytelling opportunities go."

Set up when Disney bought "Star Wars" in 2012, it was one of the first innovations of producing legend and newly appointed Lucasfilm chief Kathleen Kennedy.

Led by Hidalgo, Carrie Beck, Diana Williams and a handful of other lifelong fans, the group's big first task was wiping the slate clean to make way for this new single narrative.

The group staged a Brexit of sorts from their own EU - George Lucas's mainly fan-created "Expanded Universe" of comics, novels, video games, and more, built up over decades.

That material would stay in circulation under a new "Star Wars Legends" banner, but movie episodes seven to nine would not have to honour its many stories.

From then on, all material - from the new movies to the "Clone Wars" and "Rebels" animated series - would go through the Story Group for approval as part of the official "canon."

Star Wars Day: May the 4th be with you festival

"We had decades and decades of publishing that was written with the assumption that there would be no more 'Star Wars' movies," said Hidalgo, who joined Beck and Williams at a Disney press day in Los Angeles this week.

"When it became apparent that we were going to do 'Episode VII' - and the storyline that George kicked off made it clear that 'Episode VII' did not resemble the galaxy described in the books - we said, 'Let's align all this stuff.'"

From 2014, the Story Group was able to furnish creatives, from comic book writers to theme park designers, with a rich trove of background material - fact-checking dialogue, plot lines and the most obscure ephemera.

Beck, who worked on the relationship between "Rebels" and "Rogue One" - which shared the "Clone Wars" character Saw Gerrera - said it was important to make sure all these properties worked together but could still be enjoyed independently.

"We think about how (characters) enter into this narrative in a way which feels honest to their story," she said.

The system might seem unwieldy and dictatorial, but it is appreciated by fans and filmmakers alike.

The last thing you want in your "Star Wars" novel is Chewbacca winning a tap dancing competition when a video game released years earlier established that he has two left feet.

"What we don't want to do is create something that feel like it is an outlier in a way that it doesn't feel like it fits within the larger universe," said Williams.

"What we want is for people to feel engaged and that no matter how varied that expression might be, all things are authentic, valuable."

It's not just about nit-picking either - Story Group members work with writers and filmmakers to develop new ideas.

Some are turned down because the timing is wrong, they don't fit in or are just plain silly.

Others such as "Rogue One" - offered to the Story Group by Industrial Light and Magic's special effects guru John Knoll in his first-ever movie pitch - are given the green light.

"It's not like we tell them what story to tell, but we together find the story that they are looking to tell," said Hidalgo.

"And because we are a connection point for all that creative activity... we see it all, we communicate it all and we make sure we're all in sync."