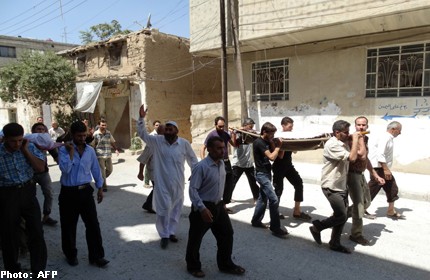 People taking part in the funeral of three civilians killed during what Syrian rebels claim to be a toxic gas attack by pro-government forces in eastern Ghouta earlier in the week, on the outskirts of Damascus.

DAMASCUS - Syria's government said Saturday that rebel fighters used chemical weapons in a northeastern district of the capital, countering charges by insurgents that the regime was behind the alleged attacks.

"An army unit is surrounding a sector of Jobar where terrorists used chemical weapons," said the state broadcaster, adding that soldiers who tried to enter the neighbourhood had "suffocated".

Rebel-held Jobar on the outskirts of Damascus has been under army bombardment and air strikes for several months.

State television said several soldiers had suffered poison gas inhalation and some were in critical condition.

The Syrian Observatory for Human Rights said the government carried out four air raids on Saturday on areas near Jabar, where soldiers and rebels fighters were locked in fierce clashes.

The state broadcaster also said that Saudi Arabia and Qatar, which both openly support the 29-month-old revolt against President Bashar al-Assad, had supplied rebels with gas masks and medication.

In a sweep of Jabar, "the army found barrels marked 'made in Saudi Arabia' and gas masks, " a correspondent for the channel reported, adding that medicine for poison gas inhalation was also found, with the brand of a German-Qatari firm.

Rebels have "resorted to chemical weapons after the successes of the Syrian army in recent days," the television charged.

The UN disarmament envoy, Under Secretary General Angela Kane, was in Damascus on Saturday after the opposition accused Assad's forces of killing more than 1,300 people in gas attacks Wednesday southwest and east of the capital.

Syria has denied the charges but has yet to say if it will allow a team of UN chemical weapons inspectors - already on the ground since August 18 to probe three other sites - to investigate the latest allegations.