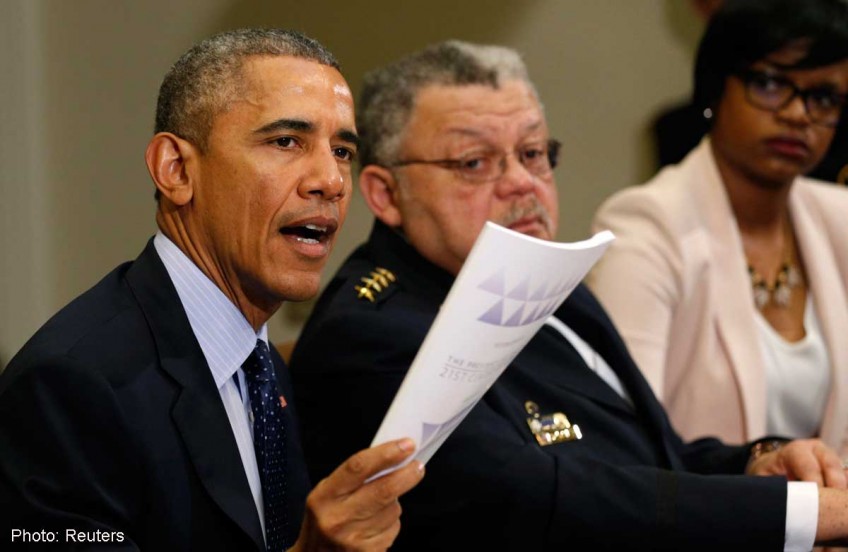 US President Barack Obama holds up a copy of the report by the Task Force on 21st Century Policing at the White House in Washington March 2, 2015. Obama met with the group to discuss their recommendations on how to strengthen community policing and strengthen trust among law enforcement officers and the communities they serve. Beside Obama at right is Philadelphia Police Commissioner Charles Ramsey.

WASHINGTON - Philadelphia's police is riddled with "serious deficiencies" in its use of deadly force, the US Justice Department said Monday, amid a national debate about relations between law enforcement and African Americans.

The damning findings come in a report prompted by an increase in shootings involving police officers in 2013 in the city.

Among the report's key recommendations was better transparency to improve relations between Philadelphia police and minority communities.

The Department of Justice examined 394 shootings involving police between 2007 and 2014 in Philadelphia: nearly 60 per cent of police officers involved were white and of those shot 81 per cent were black.

Over the seven years the review found "serious deficiencies in the department's use of force policies and training," as well as insufficient supervision and accountability in deadly shooting cases.

The Justice Department will work with Philadelphia police to implement the report's 91 recommendations, the department said in a statement.

It did not go as far as saying racial bias existed in the force.

The paper comes three weeks after the publication of a similar report found racism in the police department in Ferguson, Missouri where a young black man was killed by a white officer last year, sparking protests that spread to major cities in the United States.