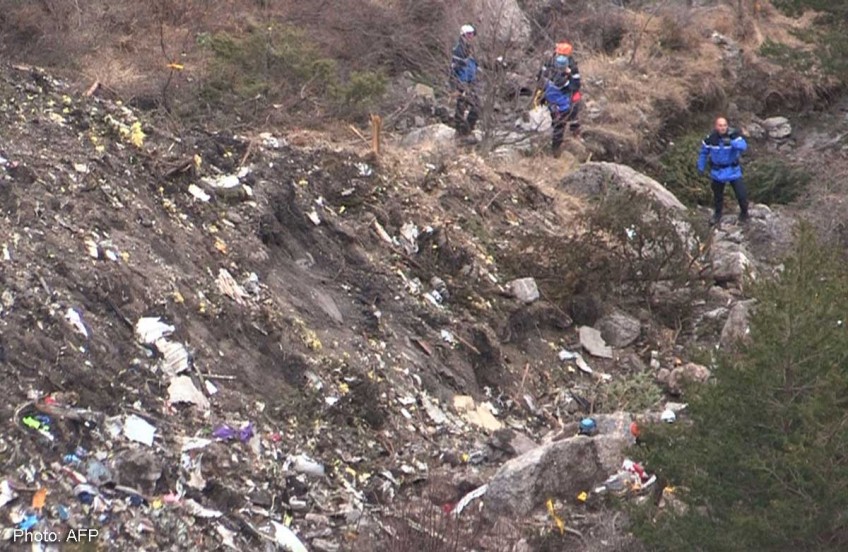 SEYNE-LES-ALPES, France - The arduous search for the 150 victims of the worst aviation disaster on French soil in decades was set to resume at dawn Wednesday, as European leaders visit the site of the tragedy to pay their respects.

Germanwings budget flight 4U9525, carrying 144 passengers including 16 German teenagers returning home from a school trip, plunged for eight minutes before hitting the side of a mountain in the French Alps Tuesday with no survivors.

There was no response to desperate attempts by air traffic controllers to hail the pilots.

The accident's cause remains a mystery but authorities have recovered a black box from the Airbus A320 at the crash site, where debris was believed to be scattered over four acres of remote and inaccessible mountainous terrain, hampering rescue efforts.

More than 300 policemen and 380 firefighters have been mobilised. Lieutenant Colonel Jean-Marc Menichini said a squad of 30 mountain rescue police would resume attempts to reach the crash site by helicopter at dawn Wednesday, while a further 65 police were seeking access on foot. Five investigators had spent the night at the site.

It would take "at least a week" to search the remote site, he said, and "at least several days" to repatriate the bodies.

Video images from a government helicopter Tuesday showed a desolate snow-flecked moonscape, with steep ravines covered in scree. Debris was strewn across the mountainside, pieces of twisted metal smashed into tiny bits.

The plane was "totally destroyed", a local MP who flew over the site said, describing the scene as "horrendous".

"The biggest body parts we identified are not bigger than a briefcase," one investigator said.

A crisis cell has been set up in the area between Barcelonnette and Digne-les-Bains along with an emergency flight control centre to coordinate chopper flights to the crash site.

The 144 passengers were mainly German and Spanish.

The high school in the small German town of Haltern attended by the 16 students on the plane was set to hold an event Wednesday to honour the victims.

"This is certainly the darkest day in the history of our city," said a tearful Bodo Klimpel, the town's mayor, Tuesday. "It is the worst thing you can imagine."

Spain, meanwhile, declared three days of mourning and was to hold a minute of silence across the country at noon Wednesday.

Opera singers Oleg Bryjak, 54, and Maria Radner, 33, were also on board, flying to their home city of Duesseldorf. Radner was travelling with her husband and baby, one of two infants on board the plane.

Working on assumption of 'accident'

Budget airline Germanwings said the Airbus, travelling from Barcelona to Dusseldorf, plunged for eight minutes but the crew made no distress call before crashing near the ski resort of Barcelonnette.

One of the plane's black boxes has been found, but it was unclear whether it was the flight data recorder or the cockpit voice recorder. Investigators will continue searching for the second black box Wednesday.

Weather did not appear to be a factor in the crash, with conditions calm at the time, French weather officials said.

Lufthansa, the parent company of Germanwings, said it was working on the assumption the crash was an "accident".

"Anything else would be speculation," Lufthansa vice president Heike Birlenbach told reporters in Barcelona.

She said the 24-year-old Airbus A320 had undergone its last routine check on Monday.

Germanwings executive Thomas Winkelmann said the pilot had "more than 10 years of experience" and some 6,000 flying hours on an Airbus jet under his belt.

It was the first fatal accident in the history of Germanwings, and the deadliest on the French mainland since 1974 when a Turkish Airlines plane crashed, killing 346 people.

"Ground access is horrible ... it's a very high mountainous area, very steep and it's terrible to get there except from the air during winter," local resident Francoise Pie said.

Another local official, Gilbert Sauvan, told AFP: "The only possible access was by helicopter and people had to be winched down because the choppers couldn't land."

Germanwings said 67 Germans were believed to have been on board, while Spain said 45 people with Spanish-sounding names were on the flight.

Two Colombians, two Argentines, and two Australians were among the dead, according to their governments, while Hollande said Turks may also have been aboard.

Two Japanese were "very likely" on board, their government said. Belgium and Denmark said at least one of their nationals was on board, while Mexico said three of its citizens were believed to be among the victims and Britain said its nationals were also on board.

A Swedish third division football team booked on the fatal flight had changed flights at the last minute. "May they rest in peace," Dalkurd FF goalkeeper Frank Pettersson wrote on Twitter.

The world's worst air disasters remain the March 27, 1977, collision of two Boeing 747s on the runway at Tenerife in the Canary Islands, killing 583 people, and the August 12, 1985 crash into a mountainside of a Boeing 747 belonging to Japan Airlines, killing 520 people.