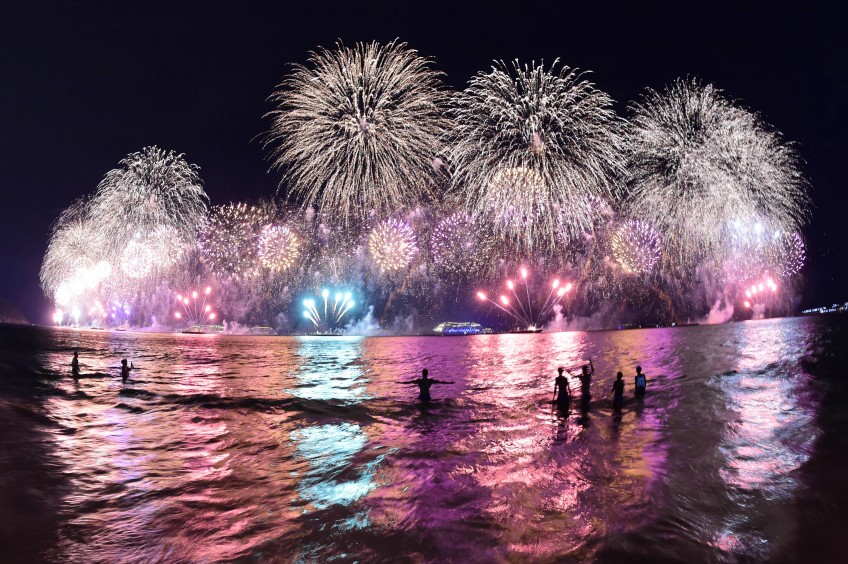 People take a dip in the sea during the fireworks for the new year on Copacabana beach in Rio de Janeiro on January 1, 2015.

SHANGHAI - Millions of revellers took to the streets around the world from Sydney to New York to usher in 2015 on Thursday, but in China celebrations turned to tragedy when 35 people were killed in a stampede in central Shanghai.

As the rest of the globe celebrated with spectacular fireworks displays in cities from Sydney to Moscow, chaos broke out in China's financial hub as people packed the Bund district to welcome the New Year.

Another 42 people were also injured in the crush, which happened shortly before midnight, the city's government said in a statement, adding that the incident was under investigation.

A photo on the website of the Shanghai Daily newspaper showed what appeared to be dead and injured people lying on the ground with crowds in the background.

Official news agency Xinhua cited a witness saying coupons that looked like US dollar notes were thrown from a third-floor window and revellers along the river bank started to scramble for them.

"I felt I was suffocating and desperate," wrote one poster on Sina Weibo, a Chinese equivalent of Twitter, adding that "some people with us will not come back".

The celebrations had been moved to a new location on the Bund this year specifically out of concerns about overcrowding after nearly 300,000 people turned out last year, the paper said.

It was a tragic note on a night filled with hopes for a more peaceful year than 2014.

The optimism was demonstrated in Australia, where an estimated one million people flocked to a massive fireworks display in Sydney Harbour, defying terrorist fears days after a deadly siege.

"We are celebrating that we are a multicultural, harmonious community but we will be thinking about what happened," Sydney's Lord Mayor Clover Moore said in reference to the deadly standoff when an Iranian-born gunman took 17 hostages in a cafe.

In Hong Kong, hundreds of thousands of people crowded the city's promenades to watch an eight-minute pyrotechnic display after a year in which busy thoroughfares paralysed for months by pro-democracy protests.

"I think a more peaceful year would be good for everybody," said Louis Ho, 65.

Europe's celebrations kicked off in Moscow, where red and green fireworks lit up the sky over St Basil's Cathedral, bringing "oohs" and "aahs" from the crowd braving sub-zero conditions.

President Vladimir Putin sent a greeting to his US counterpart Barack Obama, saying they had a mutual responsibility to ensure world peace after a year that has seen relations between Russia and the West sink to their worst point since the Cold War.

Dubai celebrated the new year with a light and sound extravaganza at the Burj Khalifa, the world's tallest tower, which was lit up with different-coloured panels as the clock counted down to 2015.

London was the latest major European city to welcome the New Year, its skyline illuminated by a thunderous 11-minute firework display in front of over 100,000 ticket holders gathered on the banks of the River Thames.

Further north, Edinburgh held its traditional Hogmanay street party although celebrations at the nearby Stirling Castle's were cancelled due to high winds.

In Paris, the Champs-Elysees was closed off to traffic to allow pedestrians to watch a visual spectacle projected onto the Arc de Triomphe before a huge firework display greeted the New Year.

"The Hoff" had the crowd singing along to "Looking for Freedom", the song he performed 25 years ago as the Berlin Wall fell.

Roughly 20,000 people packed Madrid's central Puerta del Sol square to ring in 2015, gobbling a grape on each of the 12 chimes of the clock at midnight for 12 months of good luck.

It was a particularly significant night for Lithuania, where leaders withdrew their first euro notes from a Vilnius bank machine after it became the 19th country to adopt the single currency.

Across Asia revellers celebrated with fireworks and music, with hundreds of thousands crowding near the landmark skyscraper Taipei 101 to watch performances by pop singers.

But in Malaysia, a sombre mood prevailed after the crash of AirAsia Flight QZ8501 carrying 162 people and flooding in the northeast that has displaced almost 250,000 people.

Year-end celebrations have been cancelled, with many companies instead launching fundraising campaigns for flood victims.

In Indonesia, where most of the victims were from, New Year festivities in the capital started solemnly with a prayer for the victims while relatives gathered in Surabaya for a candlelit vigil in the hours before midnight.

While in Afghanistan, the last French troops in the country held a ceremony in Kabul to mark the end of their deployment after NATO combat operations closed down as a new "train and support" mission takes over.

Further west, more than two million people are expected to attend a huge fireworks show on Copacabana beach in Rio de Janeiro to open celebrations marking 450 years since the founding of the city.

In the US, hundreds of thousands of revellers braced chilly temperatures and poured into New York's Times Square for the New Year party that this year features Taylor Swift.