Roma teen out of coma weeks after vigilante attack in France 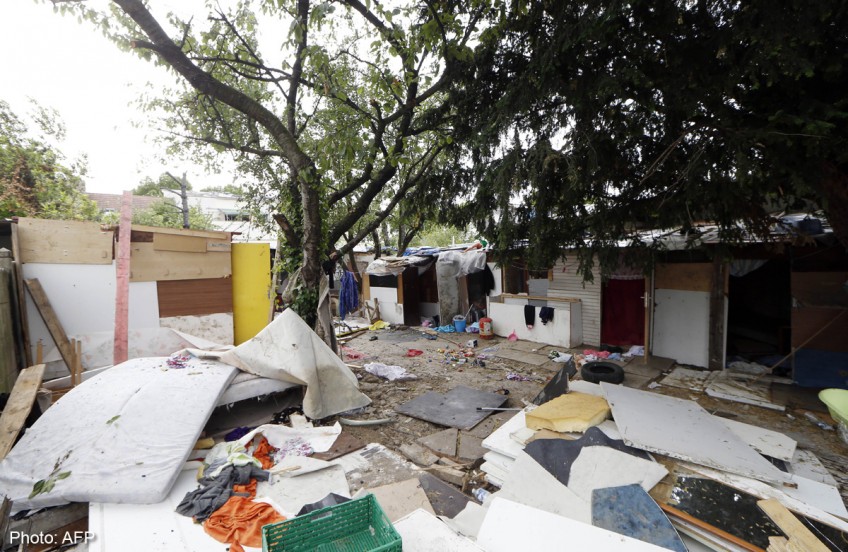 Part of a squalid camp in Pierrefitte-sur-Seine outside Paris, where the Roma teenager used to live.

BOBIGNY, France - A Roma teenager who was left struggling for his life after being brutally beaten by vigilantes in France has emerged from his coma and is talking, his lawyer said Sunday.

Gheorghe, who was initially mistakenly referred to as Darius when the incident took place last month, "is very well", Julie Launois-Flaceliere told AFP.

"He has emerged from his coma and his life is no longer in danger. He talks and recognises his family, it's very positive." The 17-year-old was dragged into a basement in the Paris suburb town of Pierrefitte-sur-Seine on June 13, savagely beaten by a dozen residents of a housing estate who accused him of theft, and left unconscious in a supermarket trolley where he was later found.

Suffering from severe brain injuries, Gheorghe was taken to a Paris hospital where he has been treated since the attack.

Launois-Flaceliere said it was too early to assess the after-effects of his trauma, but added he appeared to be recovering his memory.

A source close to the case said the judge tasked with investigating the incident was able to visit Gheorghe in hospital on Friday.

The teenager, who does not speak French, has an interpreter and his hospital room is closely guarded.

Gheorghe left Romania for France to join his parents who were already in the country.

At the time of the incident, he and his family had only just moved into an abandoned house in the town just north of Paris.

On June 13, he was taken by force in front of his parents by a group of assailants angered by a rumour that he had broken into an apartment in a nearby estate.

It is unclear how many people beat him up, but more than a month after the incident, no one has yet been detained.

Romas have long suffered discrimination across Europe, centuries after migrating there from India.

The Nazis killed hundreds of thousands of Roma during World War II, and even now rights organisations have warned of a spike in violence against the community in Europe.

In France, many of the 20,000-or-so Roma come from Romania or Bulgaria in search of a better life, and often end up living in extreme poverty in makeshift settlements with little or no access to basic amenities including water.

These are systematically destroyed under a controversial, official French requirement, forcing the traditionally sedentary population to move on to other settlements.

Their presence in illegal camps on the fringes of towns and cities has often spurred controversy in France where they are perceived as being behind a rise in petty crime.