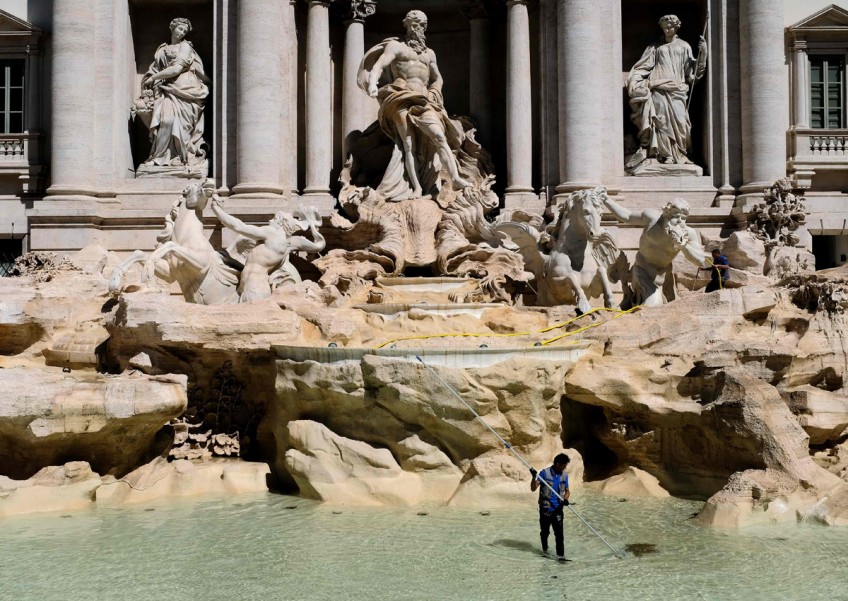 A worker collects coins in the Trevi Fountain on May 2, 2017 in Rome during the usual monthly cleaning.
AFP

ROME - Rome is cracking down on anyone hoping to recreate Anita Ekberg's dip in the Trevi fountain in the film "La Dolce Vita" on Monday, imposing fines for bad behaviour in and around the city's watery wonders.

One of Italy's most visited cities, Rome has long struggled to keep tidy treasures such as the Colosseum, and tourists paddling in its sculpted fountains have done little to help in recent years.

Angry headlines in Italian newspapers as temperatures have risen in recent weeks have included "The incivility continues: Tourists in the fountains and the flowerbeds" and "Monuments under attack".

Mayor Virginia Raggi said people caught picnicking or camping out on the fountains' pedestals, putting their feet in the water or going for a swim would be fined up to 240 euros (S$371.6).

"We need to protect our city, and good behaviour is important," Raggi, a member of the anti-establishment 5-Star Movement, said in a video posted on Facebook.

The decree imposing the fines, which start from a minimum of 40 euros, is valid for the summer season until Oct. 31.

"Rome's police has been tasked with monitoring these sites even more closely," Raggi said in the video, filmed overlooking the imposing white Altar of the Fatherland in central Rome.

As well as the Trevi, the list of monuments marked out for extra protection includes the 500 year-old Barcaccia, a boat-shaped fountain at the foot of the Spanish Steps which was badly chipped by drunken football supporters in 2015.