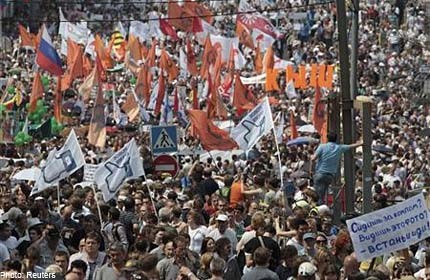 Several thousand protesters took to the streets of central Moscow on Thursday evening to protest the sentencing of Putin's top critic, Alexei Navalny, to five years in a penal colony on embezzlement charges.

During the rallies some protesters apparently scrawled "Putin is a thief" and "Putin is gay" on the building of the lower house of parliament, the State Duma, which is not far from the Kremlin, an AFP photographer said.

Signs put up on the windows of the Duma read: "Navalny for president, Putin to jail", while dozens of red round stickers were emblazoned with the word "Navalny".

Some of the graffiti on the windows were mirror written so that they could be read from inside the parliament building.

Police said on Saturday it had opened a criminal case into vandalism.

"A criminal case has been started over putting offensive signs, placards and stickers on the building of the State Duma on July 18 2013," Moscow police said on Twitter.

Police said the charges would be brought against "unidentified people". A Moscow police spokesman confirmed to AFP the case had been opened.

The charges carry a penalty of up three years in prison.

"Do police think that the State Duma building could be defiled with stickers?" Navalny, who earlier Saturday returned to Moscow from a provincial city where he was jailed and then suddenly released on appeal, quipped on Twitter.

Putin's spokesman Dmitry Peskov told reporters on Friday that while "constructive criticism" was welcome, offence was not acceptable.

In a separate statement, the Investigative Commitee said it would open a criminal probe against an unidentified man over violence against a police officer at the same rally.

The committee, which is a rough equivalent of the FBI in the United States, said the man began threatening the policeman when he was detaining another man.

He tried to restrain the policeman and tore off one of his shoulder straps before disappearing, the committee said, adding efforts were under way to find him.

Critics accuse Putin of presiding over an unprecedented clampdown on the opposition after returning to the Kremlin for a third presidential term last year.

Twelve Russians are now on trial over their involvement in mass riots in the centre of Moscow that suddenly descended into violence on the eve of Putin's inauguration.