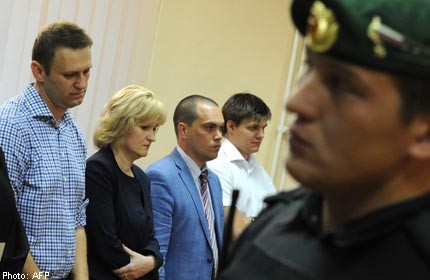 KIROV, Russia - A Russian court on Thursday convicted protest leader Alexei Navalny of embezzlement, in a verdict that will disqualify one of President Vladimir Putin's fiercest critics from politics and could see him jailed for several years.

Judge Sergei Blinov said he found Navalny guilty of colluding to steal 16 million rubles (S$625,448) in a timber deal while acting as an unpaid advisor to the local government in the northern Kirov region.

Blinov was reading through the full judgement before issuing a sentence, a process which could still take several hours despite his high-speed delivery which made parts of the verdict almost inaudible.

"The court has established that Navalny organised the criminal act and led the execution of this large-scale embezzlement," Blinov told the cramped courthouse in Kirov.

Anti-Kremlin activists have slammed the trial as the latest in a line of moves by Putin to snuff out the slightest hint of opposition to his 13 years of rule.

The conviction alone will remove Navalny, who was on Wednesday registered to run for Moscow mayor, from politics once the appeals process is exhausted.

The charismatic 37-year-old, who emerged as a key figure in the mass anti-Putin protests that broke out in December 2011, has dismissed the charges against him as absurd and a set-up to end his budding political career.

In his usual dress of a shirt with rolled-up sleeves and jeans, Navalny showed little emotion as his verdict was read out. But he immediately picked up his mobile phone to tweet his reaction.

"'Organised'... That means that there is going to be no beautiful scene with an acquittal," Navalny wrote. His co-accused, Pyotr Ofitserov, was also found guilty.

The entire court had to stand throughout the first 90 minutes of the judgement before Blinov announced a brief break.

Navalny, occasionally sipping from a bottle of mineral water, was flanked by Ofitserov and their lawyers.

His wife Yulia and other supporters from the opposition movement like former cabinet minister Boris Nemtsov were also present in the public gallery.

In a relatively unusual move, the court has allowed video recording of the entire trial to be broadcast live online.

But state television showed only limited interest in the process and preferred to lead news bulletins with glowing reports about the success of Russian athletes at the Universiade world student games which wrapped in Kazan on Wednesday.

Anti-Putin activists have vowed to stage protests against the verdict outside the Kremlin walls later Thursday, but the Moscow municipality warned against such actions.

"No application for permission has been received and this will be seen as an illegal event," said the head of the Moscow security department, Alexei Mayorov, quoted by the state ITAR-TASS news agency.

Navalny had predicted on his blog ahead of his trial that he would be found guilty and that Putin would be behind the decision, with the only suspense whether he would be sent to jail or given a suspended sentence.

The verdict comes a day after he was accepted as a candidate for the high-profile Moscow mayoral race in September, raising the bizarre prospect that he could run for office while behind bars.

Navalny's disqualification from politics would only take effect after the appeal process, so he could still theoretically campaign during this period.

Navalny has said he wants to challenge Putin in the next presidential elections in 2018 and coined the phrase "the party of crooks and thieves" to describe the ruling United Russia party.

In a typically uncompromising gesture, Navalny this week published a detailed report accusing one of Putin's closest allies, the head of Russian Railways, Vladimir Yakunin, of possessing vast undeclared property and business assets.

Navalny has also yet to win wide recognition beyond his powerbase in Moscow, where he has become a hero for many in the Internet savvy middle class who yearn to live in a different Russia.