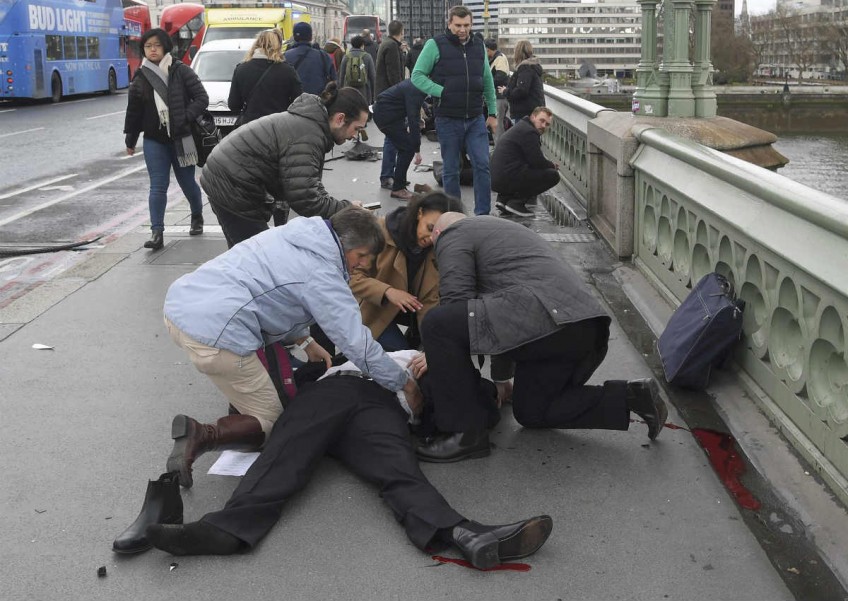 Injured people are assisted after an incident on Westminster Bridge in London, March 22, 2017.
Reuters

Update: The Ministry of Foreign Affairs (MFA) and Singapore High Commission in London have reached out to the Singaporeans e-registered in London. So far, there are no Singaporeans directly affected or injured in the Westminster attack, MFA said in a statement.

Four people were killed and 40 injured after being run over and stabbed in a lightning attack at the gates of British democracy on Wednesday attributed by police to "Islamist-related terrorism".

The attack unfolded across Westminster Bridge in the shadow of Big Ben, a towering landmark that draws tourists by the millions and stands over Britain's Houses of Parliament - the very image of London.

The attacker's car struck pedestrians on the bridge before crashing into the railings surrounding the heavily-guarded Houses of Parliament, sowing first shock then panic in the seat of British power.

The assailant then ran through the gates brandishing a knife and stabbed a 48-year-old policeman to death before being shot dead by another officer.

Prime Minister Theresa May described the attack as "sick and depraved" and said that "the terrorist chose to strike at the heart of our capital city" in an attack on Britain's democratic values.

Standing outside her Downing Street residence after an emergency cabinet meeting, May voiced defiance and said parliament would meet as normal on Thursday, while Britain's alert level would be kept unchanged.

"We will all move forward together, never giving in to terror and never allowing the voices of hate and evil to drive us apart," said May, who was dressed in black.

"Islamist-related terrorism is our assumption," Rowley told journalists, adding investigators believe they know the identity of the assailant who was shot dead by police.

The attack came a year to the day after Islamic State jihadists killed 32 people in twin bomb attacks in Brussels and after a series of deadly assaults in Europe that had hitherto spared Britain.

Parliament was locked down for several hours and hundreds of lawmakers and visitors were later evacuated to nearby Westminster Abbey and the headquarters of London's Metropolitan Police.

An air ambulance flew in and police cordoned off a large area, while tourists on the London Eye, a popular visitor attraction, were stuck up to 135 metres (443 feet) in the air for more than an hour during the incident.

"I saw three bodies lying on the ground and a whole lot of police. It was pretty terrifying," said Jack Hutchinson, 16, from the United States, who was stranded on the observation wheel with his parents.

Foreign Office minister Tobias Ellwood, whose brother Jonathan was killed in the 2002 Bali bombing, was pictured with his face smeared with blood helping to give first aid to the fatally wounded police officer.

'We Are Not Afraid'

Britain's last terror attack was the assassination of MP Jo Cox by a pro-Nazi sympathiser in her constituency in northern England.

The worst previous attack in London was in 2005 when four British suicide bombers inspired by Al-Qaeda attacked the transport system, killing 52 people.

Britain's allies reacted with shock and vowed to stand with London in the fight against terror.

US President Donald Trump and French President Francois Hollande both spoke to May and Chancellor Angela Merkel said Germany stood with Britons "against all forms of terrorism".

Lights on the Eiffel Tower in Paris were switched off at midnight in solidarity with victims of the attack.

Social media users shared an altered image of a London Underground sign reading "We Are Not Afraid" and the hashtag #PrayforLondon trended on Twitter.

May was in parliament at the time of the attack and was seen being ushered away in a silver car as what sounded like gunfire rang out, British media reported.

Three French pupils on a school trip were among those hurt and a seriously injured woman was rescued from the River Thames following the incident.

The five were injured in the chaos that ensued when the attacker ploughed into pedestrians on the Westminster Bridge, the foreign ministry said.

Three women and one man in their 50s and 60s suffered injuries including broken bones, while another woman in her 60s suffered a head injury while falling and was taken to a hospital for surgery.

A doctor at nearby St Thomas' Hospital said they were treating people with "catastrophic" injuries.

Press Association news agency photos believed to be of the attacker lying on an ambulance stretcher showed he was wearing black clothes and had a beard.

British lawmaker Mary Creagh told AFP there was "a real sense of panic" as the attack unfolded.

Polish former foreign minister Radoslaw Sikorski was in a taxi on the bridge and said a car "mowed down at least five people... one of them bleeding profusely".

Pictures of what happened next showed two people being attended to on the ground inside the vehicle entrance gates of parliament, with a knife visible on the cobblestones.

Jason Groves, the Daily Mail newspaper's political editor, said he saw the officer firing "with a handgun, and then gets closer to him and shoots him again from over him and he doesn't get up".