Emiliano Sala's sister has shared a heartbreaking image of the footballer's dog patiently waiting for him to return home, reported Mirror UK.

Sala went missing aboard a piper malibu aircraft over the English Channel on Jan 21 shortly after signing for Cardiff in a club-record, £15mil deal.

He was returning to South Wales having said his goodbyes to former teammates and staff at Nantes.

The plane carrying Sala and pilot David Ibbotson, who are both missing presumed dead, was discovered by a private underwater search team on Sunday (Feb 3) morning.

A body was spotted in the wreckage, but it has yet to be identified.

Sala's sister, Romina, posted the image on Facebook of rescued dog Nala staring into the distance.

She captioned: "Nala is waiting for you, too." 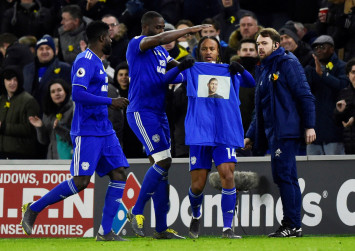 Sala had a very close relationship with his dog, with Nala reportedly one of the reasons the star returned to France.

It is understood the Argentinian had taken Nala to kennels and was in the process of moving her to Wales to live with him.

The initial search for Sala, carried out by Guernsey Police, was called off after four days.

A private team led by renowned shipwreck hunter David Mearns resumed the search and discovered the plane on Sunday.

He said: "Our job is done. This is an active investigation now in the hands of the AAIB (Air Accidents Investigation Branch), and they will be taking over as agreed.

"We've had a long trip back and all I could think about was the families. This is what they wanted us to do, we've achieved it and that's the best we could have hoped for - the best outcome.

"An incredibly tragic and sad, and a devastating moment, but at least some of their questions will be answered because of what we will be able to do today."

Boss Neil Warnock was clearly emotional after the game, shedding tears as he saluted the crowd following the full-time whistle.