The Salton Sea: a time-bomb amid California drought 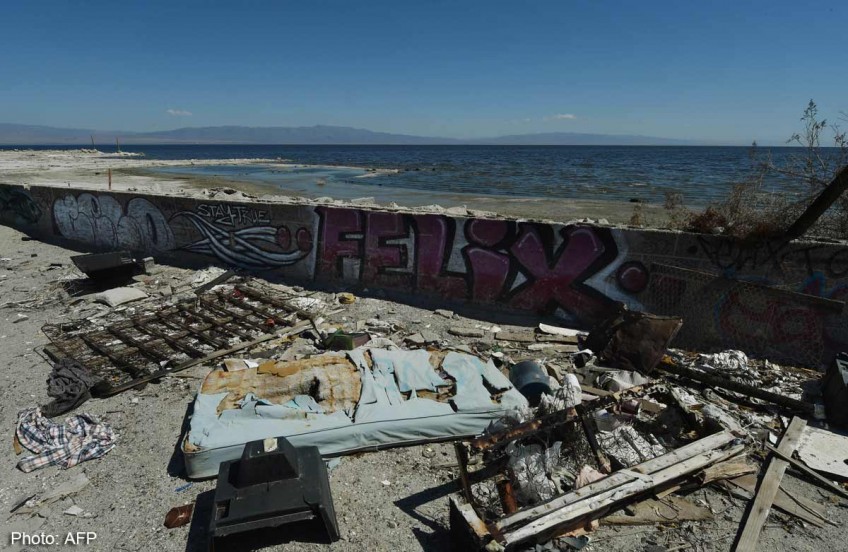 The remnants of an abandoned marina are seen at Salton City beside the Salton Sea, California on March 19, 2015.

LOS ANGELES - At first sight the Salton Sea looks putrid, with dead fish scattered among patches of fetid water in a vast salty lake in the middle of the Californian desert.

In the fourth year of a historic drought in the western United States, some say the wetland is an environmental time bomb.

But, on closer inspection, its beauty and fertility come through.

As the sun sets on the sea - a former upscale vacation playground - hundreds of pelicans, seagulls and ducks perform an aerial ballet against the iridescent sky, reflected in the mirror-like water.

"The reputation of the Sea always smelling, ringed by dead fish or dead birds is wrong," said Bruce Wilcox, an official with the Imperial Irrigation District, a local water-management agency.

The sea, which sees some 400 species of migratory birds pass through, was born from a civil engineering accident in 1905, which led to an overflowing of the Colorado River.

In the 1950s and 60s, the banks of the Salton Sea were a playground for southern California's rich set, who would come for water-ski-ing, yacht-racing and fishing.

At the time it was more than 50 kilometers in length and 20 wide.

"There used to be lots of ski-ing and fishing, four marinas, and so many people you couldn't put a towel on the beach," said Larry Wienebock, a retired trucker, sitting in the garage of his small house on Bombay Beach.

This former seaside resort today looks like a ghost town, its beach marred by an earth mound and scattered with the wrecks of cars and rusting metal of all sorts.

From 1970, the Salton Sea began to shrink, leading to a surge in salinity and a reduction in depth which ended its days as a fishing and boating haven.

The yacht club, fishing stores and other shops closed, in an ever-accelerating decline.

"California is in the midst of an historic drought," said Tim Krantz, professor of environmental studies at the University of Redlands.

To make matters worse, in 2017 a complex agreement which shares water from the Colorado River comes to an end, leading to an expected further decrease in water flowing into the Sea.

Wilcox said the body of water will lose a third of its surface area in just a few years, while its bed of sand mixed with sediments of cadmium, phosphates, fertilizer and insecticides will spread further, carried by frequent storms.

Krantz said: "The Salton Sea is like a football field with only 2 centimeters of water in it. It is supersensitive on any reduction of inflow.

"It would be an air quality disaster unparalleled in the world," he said, a stark warning in a region inhabited by some 1.5 million people.

Cases of asthma, lung cancer and other respiratory conditions could surge in an area where they are already four times the national average. Not to mention the billions of dollars in agricultural revenues threatened, and real estate prices which risk collapsing.

"If the Sea dries up it's going to be inhabitable because of the dust here, throughout the whole Coachella Valley," said Randy Rynearson, the salt-and-pepper grizzled owner of an ironmonger's store in Salton City.

The consequences for the ecosystem could be even more catastrophic, decimating the few fish who remain in the Sea, as well as birds deprived of a key stopping off point on their migratory flight path.

Local public bodies, environmental militants and researchers are trying everything to convince California's government to act, and to free up funds.

Numerous projects have been launched - some more realistic than others - such as the construction of pipework bringing water from the Pacific or the Gulf of California.

These projects would cost between five and 10 million dollars.

But a study by the Pacific Institute said the cost of inaction would be even higher, at $20 billion to $70 billion, not to mention the risks of interminable legal action by residents falling sick from a a long-expected disaster.