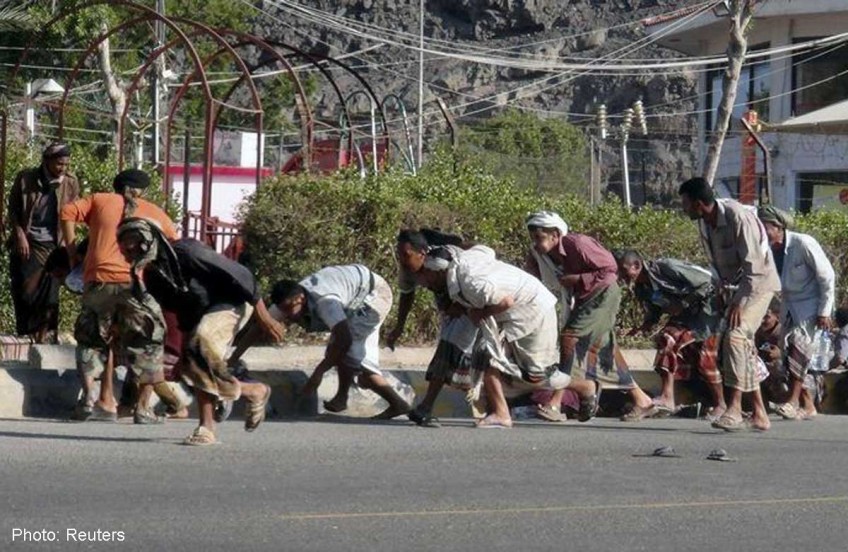 People seek shelter during a gunfire at an army base in Yemen's southern port city of Aden March 25, 2015.

Shortly after the kingdom's ambassador in Washington announced the military action, unidentified warplanes launched an attack on the Yemeni capital Sanaa's airport and its al Dulaimi military airbase, residents and an official said.

The White House said in a statement late on Wednesday that the United States supported the operation led by the Arab Gulf Cooperation Council countries and that President Barack Obama had authorised US "logistical and intelligence support."

"While US forces are not taking direct military action in Yemen in support of this effort, we are establishing a Joint Planning Cell with Saudi Arabia to coordinate US military and intelligence support," National Security Council spokesperson Bernadette Meehan said in the statement.

Yemen's slide toward civil war has made the country a crucial front in mostly Sunni Saudi Arabia's rivalry with Shi'ite Iran, which Riyadh accuses of stirring up sectarian strife throughout the region and in Yemen with its support for the Houthis. The crisis now risks spiraling into a proxy war with Shi'ite Iran backing the Houthis, and Saudi Arabia and the other regional Sunni Muslim monarchies supporting Yemeni President Abd-Rabbu Mansour Hadi.

Saudi Ambassador Adel al-Jubeir said the assaults had been launched in response to a direct request by Hadi and that a total of 10 countries, including Gulf Arab allies, were involved in the strikes.

Saudi Arabia, the United Arab Emirates, Kuwait, Bahrain and Qatar said in a joint statement carried by the official Saudi news agency that they had decided to act to protect Yemen against aggression by the Houthi militia.

"We will do whatever it takes in order to protect the legitimate government of Yemen from falling," Jubeir told a news conference.

Jubeir said Hadi's request was based both on the charters of the United Nations and the Arab League. Jubeir said the United States was not part of the coalition.

In a letter to the UN Security Council on Tuesday, Hadi said he had asked Arab states "to provide immediately all means necessary, including military intervention, to protect Yemen and its people."

Hadi cited Article 51 of the UN Charter, which covers an individual or collective right to self-defence against armed attack, as his legal justification.

A widening Yemen conflict could pose risks for global oil supplies. Most oil tankers from Arab producers like Saudi Arabia, the United Arab Emirates, Kuwait and Iraq have to pass Yemen's coastlines via the tight Gulf of Aden in order to get through the Red Sea and Suez Canal to Europe.

The 40 km (25 mile)-wide strait between Yemen and Djibouti and the Strait of Hormuz between the Arabian peninsula and Iran are both considered "chokepoints" to global oil supplies by the US Energy Information Administration. Crude oil prices rose by around 1 per cent on Thursday following news of the military strikes.

Masaki Suematsu, manager of the energy team at brokerage Newedge Japan in Tokyo, said: "Just because Saudi and others conducted air strikes doesn't mean the oil market becomes suddenly tight. But there will be repercussions ... If Saudi's oil facilities are attacked, the impact would be huge."

Wednesday's Saudi attacks in Yemen coincided with an escalation of American involvement in Iraq, where US planes carried out air strikes to support the drive to oust Islamic State militants from Tikrit.

A senior leader of Yemen's Houthi movement said that the Saudi air strikes amounted to an aggression against his country and warned they would set off a "wide war" in the region.

"The Yemeni people are a free people and they will confront the aggressors. I will remind you that the Saudi government and the Gulf governments will regret this aggression," Mohammed al-Bukhaiti, a member of the Houthi Ansarullah politburo, told Doha-based Al Jazeera television.

Jubeir said the campaign had begun with air strikes but hinted that it might be widened to other types of operations.

"We have air assets from a number of countries in the kingdom and we have military assets that are on their way to the kingdom to participate in these operations," he said. He declined to provide details.

Fighting has spread across the Arabian peninsula country since last September when the Houthis seized Sanaa and advanced into Sunni Muslim areas.

Hadi, who supported Washington's campaign of deadly drone strikes on a powerful al Qaeda branch based in Yemen, had been holed up in Aden with his loyalist forces since he fled Sanaa in February.

The United States said earlier that Hadi was no longer at the compound he has been using as a base. Houthi militia forces and allied army units seized Aden airport and a nearby air base on Wednesday, tightening their grip on the outskirts of the southern Yemeni city.

Residents later said looters had entered the residence hours after Hadi vacated it in mid-afternoon for an unknown location. Foreign Minister Riyadh Yaseen and Hadi's aides said Hadi remained in Aden, in a safe place, without elaborating.

Local officials said troops loyal to Yemen's ex-President Ali Abdullah Saleh, a powerful ally of the Houthis, had captured Aden airport in late afternoon but that clashes with Hadi supporters were continuing in the vicinity. The airport was closed and all flights were cancelled.

Earlier the Houthis and their allies took al-Anad air base 60 km (37 miles) north of the city before continuing their southward advance.

In Washington, US Republican Senator Lindsey Graham voiced concern that the Saudi attack could mark the start of a broader Sunni-Shi'ite regional war.

"This is going to be the first of many events where the Sunni Arabs push back against Iranian influence around their borders," Graham said on CNN.