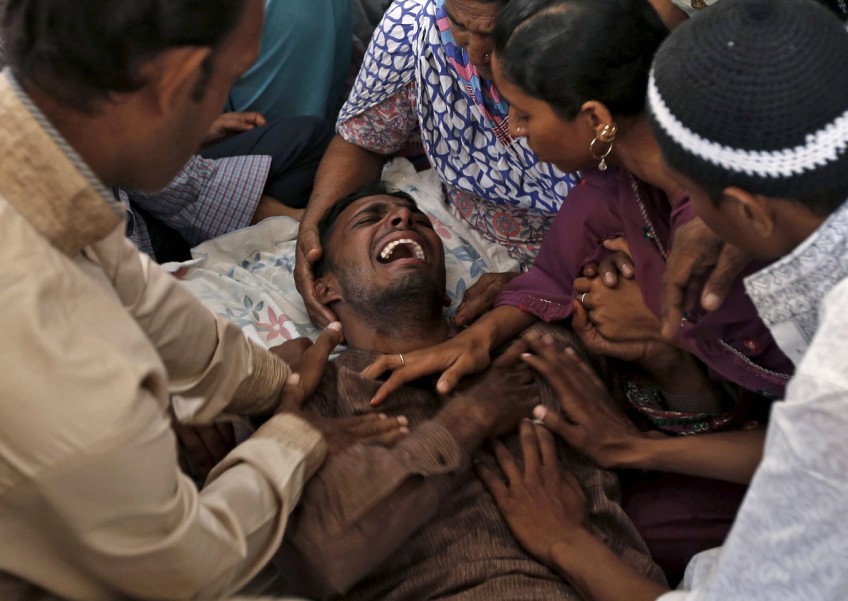 A man in India was inconsolable after getting news of his family members who died in the stampede in Mina.
Reuters

MINA, Saudi Arabia - Blame shifted towards Saudi authorities on Friday after a crush at the hajj killed at least 717 people, in the worst tragedy to strike the annual Muslim pilgrimage in a quarter-century.

The disaster, which also injured several hundred people, was the second deadly accident to hit worshippers this month, after a crane collapse in the holy city of Mecca killed more than 100.

Dark-skinned and light-skinned, they died with arms draped around each other.

"There was no room to manoeuvre," said Aminu Abubakar, an AFP correspondent who was among the pilgrims. He escaped the crush of bodies because he was at the head of a procession.

Fellow pilgrims told him of children dying despite parents' efforts to save them near the sprawling tent city where they are lodged.

"They threw them on rooftops, mostly tent-tops... Most of them couldn't make it." The stampede broke out in Mina, about 5km from Mecca, during the symbolic "stoning of the devil" ritual.

Iran said 131 of its nationals were among the victims, and accused regional rival Saudi Arabia of safety errors.

"The running of the hajj must be handed over to Islamic states," he said.

Pilgrims at the scene faulted Saudi authorities and some said they were afraid to carry on with the hajj rituals on Friday. However, they said security had improved and the crowd was smaller.

Special emergency forces were heavily deployed across Mina with dozens of troops at every level of the five-storey bridge used for the stoning ritual in which pebbles are thrown at pillars.

A Kenyan survivor who returned to the pillars on Friday told AFP his group lost three people.

"I can blame the Saudi government because they did not control (the situation). I was there. I survived," Isaac Saleh said as tears welled in his eyes.

King Salman, whose official title is "Custodian of the Two Holy Mosques" in Mecca and Medina, ordered "a revision" of how the hajj is organised, state news agency SPA said, and a formal inquiry was under way.

During weekly prayers at Mecca's Grand Mosque, Sheikh Saleh al-Taleb defended the kingdom which, he said, "is capable of managing hajj affairs" without outsiders suggesting they can do better.

"It is unacceptable to ignore all the efforts" the kingdom has made to improve infrastructure at the holy sites, he said.

Saudi Health Minister Khaled al-Falih, whose country has spent billion of dollars on safety measures at the hajj, blamed worshippers themselves for the tragedy.

He told El-Ekhbariya television that if "the pilgrims had followed instructions, this type of accident could have been avoided".

Pilgrims, however, blamed the closure of roads and poor management of the flow of hundreds of thousands of pilgrims in searing temperatures.

"People were stumbling, falling, trying to get up. They were dehydrated, getting disorientated, they were dying in front of our eyes," said South African businessman Zaid Bayat, 43.

"They were suffocating. We tried to help revive them, but for every person you were helping there were 13, 14 others just falling down," said Bayat, leading a group of South Africans.

The stampede began at around 9am Thursday.

Pilgrims were converging on Mina's Jamarat Bridge to throw pebbles, on the first day of the last major ritual of the hajj which officially ends on Saturday.

The bridge was erected in the last decade at a cost of more than US$1 billion (S$1.4 billion) and intended to improve safety after past disasters.

Interior ministry spokesman General Mansur al-Turki said "a large number of pilgrims were in motion at the same time" at an intersection of two streets in Mina.

"The great heat and fatigue of the pilgrims contributed to the large number of victims," he said.

One outspoken critic of redevelopment at the holy sites said police were not properly trained and lacked the language skills for communicating with foreign pilgrims, who make up the majority of those on the hajj.

"They don't have a clue how to engage with these people," said Irfan al-Alawi, co-founder of the Mecca-based Islamic Heritage Research Foundation.

"There's no crowd control." The disaster came as the world's 1.5 billion Muslims marked Eid al-Adha, the Feast of Sacrifice the most important holiday of the Islamic calendar.

It was the second major accident this year for pilgrims. A construction crane collapsed on September 11 at the Grand Mosque, Islam's holiest site, killing 109 people including many foreigners.

Official figures released on Thursday said 1,952,817 pilgrims had joined this year's hajj, most of them from abroad.

For years, the event was marred by stampedes and fires, but it had been largely incident-free for nearly a decade following the safety improvements.

Shiite-dominated Iran's supreme leader Ayatollah Ali Khamenei has blamed "mismanagement" by Saudi authorities, who he said "must accept the huge responsibility for this catastrophe".

Condolences came from around the world, including from UN chief Ban Ki-moon.

Pope Francis expressed solidarity with Muslims and voiced the "closeness of the church" in the face of the tragedy.