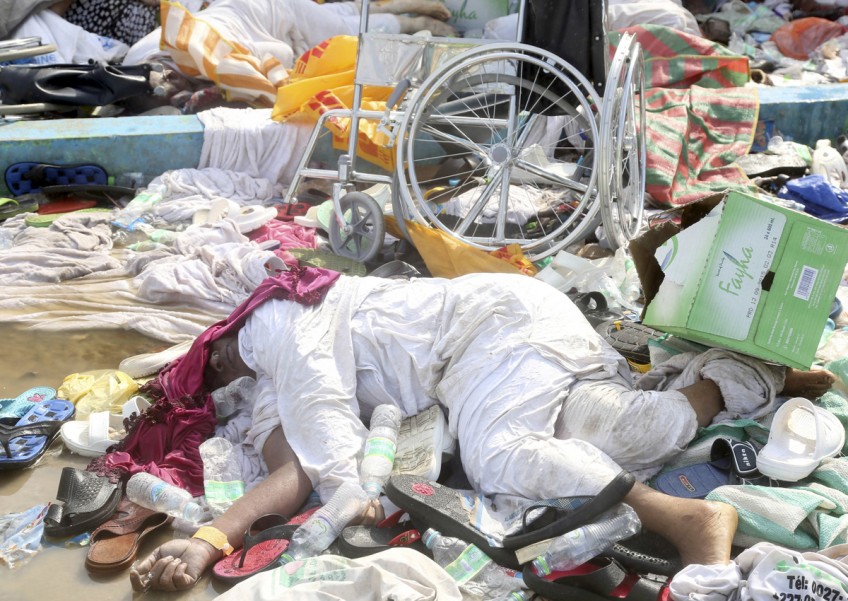 MINA, Saudi Arabia - Blame shifted towards Saudi authorities on Friday after a stampede at the hajj killed at least 717 people, in the worst tragedy to strike the annual Muslim pilgrimage in a quarter of a century.

The disaster, which also left several hundred people wounded, was the second deadly accident to hit worshippers this month, after a crane collapse in the holy city of Mecca killed more than 100.

At the scene, bodies lay in piles, surrounded by discarded personal belongings and flattened water bottles, while rescue workers laid bodies in long rows on stretchers, limbs protruding from beneath white sheets.

The stampede broke out in Mina, about five kilometres (three miles) from Mecca, during the symbolic stoning of the devil ritual. The Saudi civil defence service said it was still counting the dead, who included pilgrims from different countries.

Iran announced that 90 of its nationals were among the victims, and accused regional rival Saudi Arabia of safety errors, while pilgrims at the site blamed the authorities and said they were afraid to continue the annual religious rituals.

Saudi Health Minister Khaled al-Falih blamed worshippers for the tragedy, telling El-Ekhbariya television that if "the pilgrims had followed instructions, this type of accident could have been avoided".

The stampede began at around 9am (0600 GMT), shortly after the civil defence said on Twitter it was dealing with a "crowding" incident in Mina.

Hundreds of thousands of pilgrims had converged on Mina to throw pebbles at one of three walls representing Satan, for the last major ritual of the hajj, which officially ends on Sunday.

Interior ministry spokesman General Mansur al-Turki said the stampede was caused when "a large number of pilgrims were in motion at the same time" at an intersection of two streets in Mina.

"The great heat and fatigue of the pilgrims contributed to the large number of victims," he said. Temperatures in Mina had reached 46 degrees Celsius (115 degrees Fahrenheit) Thursday.

Witnesses, however, blamed the authorities, while one outspoken critic of redevelopment at the holy sites said police were not properly trained and lacked the language skills for communicating with foreign pilgrims, who make up the majority of those on the hajj.

"They don't have a clue how to engage with these people," said Irfan al-Alawi, co-founder of the Mecca-based Islamic Heritage Research Foundation.

"There's no crowd control." After the incident helicopters patrolled overhead and ambulance sirens wailed as the injured were rushed to hospitals, AFP reporters said.

At one facility, a steady stream of ambulances discharged pilgrims on stretchers.

The disaster came as the world's 1.5 billion Muslims marked Eid al-Adha, the Feast of Sacrifice, the most important holiday on the Islamic calendar.

It was the second major accident this year for hajj pilgrims, after a construction crane collapsed on September 11 at Mecca's Grand Mosque, Islam's holiest site, killing 109 people, including many foreigners.

The hajj is among the five pillars of Islam, and every capable Muslim must perform it at least once in a lifetime. Official figures released Thursday said 1,952,817 pilgrims had performed this year's hajj, including almost 1.4 million foreigners.

For years the event was marred by stampedes and fires, but it had been largely incident-free for nearly a decade following safety improvements.

In the last major incident, in January 2006, 364 pilgrims were killed in a stampede during the stoning ritual, and in 1990, 1,426 mainly Asian pilgrims died in a tunnel stampede at Mina after a ventilation system failure.

There was little immediate information on the nationalities of the dead, though India said 14 of its nationals died, while Jakarta said three Indonesians were killed. Officials in Turkey said at least 18 of its citizens were reported missing.

In Shiite-dominated Iran, supreme leader Ayatollah Ali Khamenei blamed "improper measures" and "mismanagement" by Saudi authorities, who he said "must accept the huge responsibility for this catastrophe".

Condolences came from capitals around the region and the globe, including from UN Secretary General Ban Ki-moon, while Pope Francis expressed solidarity with Muslims and voiced the "closeness of the church" in the face of the tragedy.

The stoning ritual emulates the Prophet Abraham, who is said to have stoned the devil when he tried to dissuade Abraham from God's order to sacrifice his son Ishmael.

At the last moment, God spares the boy, sending a sheep to be sacrificed in his place.

Muslims worldwide commemorated Abraham's willingness to sacrifice his son by slaughtering cows, sheep and other animals on Thursday as part of Eid al-Adha.

Eid celebrations were also marred in neighbouring Yemen, where an Islamic State suicide bomber struck a mosque in the capital Sanaa in an attack targeting Shiite rebels, leaving 25 dead.