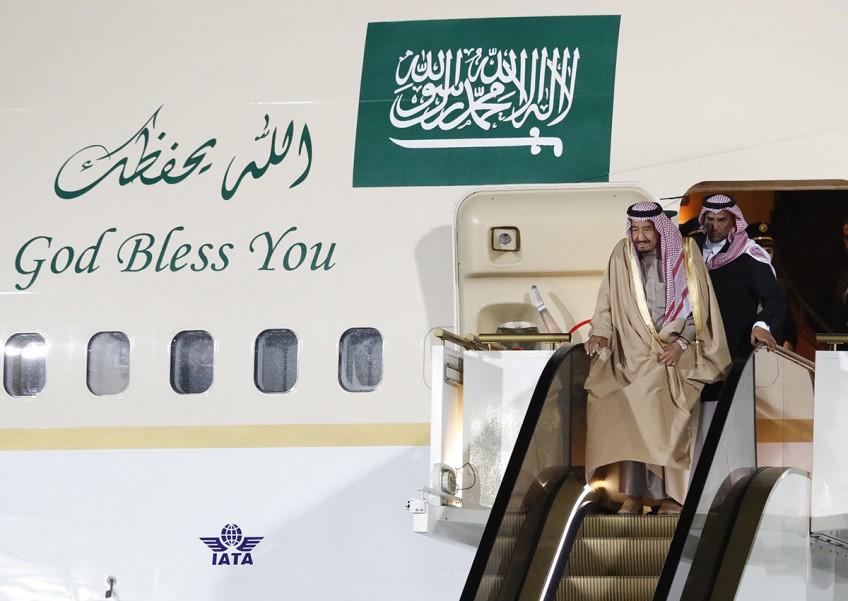 MOSCOW - Saudi Arabia's King Salman arrived in Moscow on Wednesday, the first official visit to Russia by a ruler of the Sunni state.

His three-day trip is expected to focus on energy and the Syrian conflict.

Salman could be seen descending an escalator from his plane in Moscow's Vnukovo airport after landing around 1600GMT.

The escalator however stopped midway, forcing the king to wait. He eventually walked down on to damp tarmac where he was met by Russian officials and a military brass band.

Saudi Arabia and Russia are heavily dependent on oil exports and the plunge of the price of crude that began in 2014 lashed both of their economies.

Salman will meet President Vladimir Putin on Thursday and they are expected to discuss extending oil production cuts ahead of the OPEC oil cartel meeting in November.

OPEC and some other non-member producers, including Russia, have agreed to cut crude output which has helped prop up oil prices. On Wednesday Putin said an extension of the OPEC deal was possible and could last "at least to the end of 2018".

OPEC and its allies agreed from the beginning of 2017 to cut their production by around 1.8 million barrels per day for six months. It was subsequently extended through March 2018.

Riyadh has had to slash subsidies and delay major projects since the mid-2014 price on crude, and Salman is keen to continue efforts to control output to bolster prices.

The king is also set to met Prime Minister Dmitry Medvedev on Friday before leaving Russia on Saturday.

Russian energy minister Alexander Novak told TASS news agency on Wednesday that Saudi Arabia is investing $1 billion into energy projects in Russia though he did not give details or specify if these deals would be signed during the visit.

Vedomosti newspaper reported Wednesday that Saudi Arabia's sovereign fund is also eyeing investment into a toll road project in Moscow, which would be the first one for the capital.

While they are partners on the oil market, on the foreign policy front, Moscow and Riyadh land on opposite sides of the Syrian conflict, with Russia supporting the regime of Bashar al-Assad while Saudi Arabia supports his opposition.

The Kremlin said ahead of the visit that Salman and Putin will discuss "the situation in the Middle East and North Africa, especially focusing conflict situations in the region."

The two also diverge on Yemen, where a Saudi-led coalition has been bombing Huthi rebels since 2015, drawing criticism from Moscow.