An artist rendition of a newly identified ancient panda.

Scientists believe they have found Europe's last known relative of the giant panda in the forested wetlands of Bulgaria.

The species, named Agriarctos nikolovi, lived during the late Messinian age, a period that spanned from about 5.33 to 7.25 million years ago.

Unlike its iconic Chinese relative, the newly identified panda species did not rely entirely on bamboo. It was, however, likely a herbivore, the authors wrote in the Journal of Vertebrae Palaeontology published on July 31.

"The likely competition with other species, especially carnivores and presumably other bears, explains the closer food specialisation of giant pandas to vegetable food in humid forest conditions," said Nikolai Spassov, a study co-author and professor at the Bulgarian National Museum of Natural History in a press release.

The two fossils used to identify the bear were teeth that had been discovered in the late 1970s. One fossil was a canine tooth from the front of the mouth and the other a carnassial from the back.

Spassov's colleague, Qigao Jiangzuo from Peking University in Beijing, identified the teeth as belonging to Ailuropodinae, the same subfamily of modern pandas. Giant pandas are the only remaining members of that classification.

The teeth of the ancient panda were very similar, albeit a bit smaller, when compared to giant pandas, suggesting that the prehistoric bear was a smaller relative.

The teeth show that the bear relied on a diet of plants, but they also do not appear to have been strong enough to cut through the tough, woody texture of bamboo. The teeth are sharp, and the bears probably used the teeth to defend themselves against other wildlife.

"Although not a direct ancestor of the modern genus of the giant panda, it is its close relative," said Spassov about the newly identified species.

Read Also
For pandas, it's been 2 'thumbs' up for millions of years 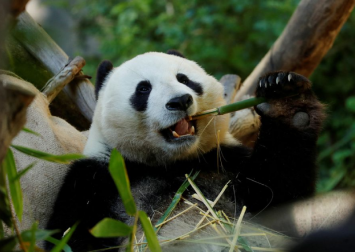 The scientists hypothesised that the ancient bear may have gone extinct during the "Messinian salinity crisis", an event when what is now the Mediterranean Sea dried up, dramatically changing the regional climate.

Interestingly, they also proposed that there were two different lineages of prehistoric pandas. One, which lived in Europe millions of years ago, included the newly discovered panda, that has since died out.

The other lineage would have evolved in Asia and could have contained animals that were the direct ancestors of modern giant pandas.

However, Spassov added that because the oldest pandas were found in Europe, it is plausible ancient European pandas slowly migrated into Asia, where they eventually developed into today's giant panda.

The fact that the identification of the bear did not involve discovering a new fossil is an example of the value of sifting through storage and applying modern technology to fossils that were discovered years or decades earlier.

"This discovery shows how little we still know about ancient nature and also demonstrates that historic discoveries in palaeontology can lead to unexpected results, even today," he said.

The species name, Agriarctos nikolovi, is a nod to the palaeontologist Ivan Nikolov, who catalogued and stored the teeth when they were first discovered, allowing them to be reanalysed today.

"They had only one label written vaguely by hand," said Spassov. "It took me many years to figure out what the locality was and what its age was. Then it also took me a long time to realise that this was an unknown fossil giant panda."