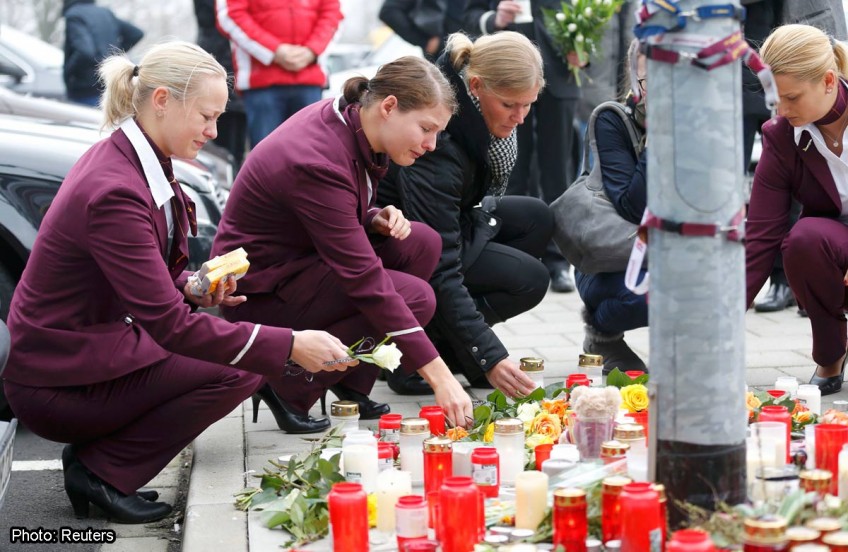 Germanwings employees cry as they place flowers and lit candles outside the company headquarters in Cologne Bonn airport March 25, 2015.

SEYNE, France - Investigators Wednesday scoured the pulverised debris of a German airliner for bodies and clues to its mysterious eight-minute descent and crash in the French Alps that killed all 150 aboard.

Hundreds of firefighters and police near the hamlet of Le Vernet launched a massive operation at the rugged crash site, accessible only by helicopter or by an arduous hike on foot.

Meanwhile in Paris, experts began analysing one of the plane's black boxes for clues as to why the Germanwings Airbus A320 went down in good weather - an "inexplicable" disaster according to Lufthansa, the budget airline's parent company.

French President Francois Hollande and his counterparts from Germany and Spain were due to visit the crash site at 2:00pm (1300 GMT) to pay their respects to the mainly German and Spanish victims of the air disaster, the worst in France for decades.

Meanwhile, relatives of the dead were to arrive Wednesday at a village near the crash site, where a counselling centre had been established.

The examination of the damaged black box, which records conversations and noises in the cockpit, would begin "in the coming hours," pledged French Interior Minister Bernard Cazeneuve.

Transport Minister Alain Vidalies said that if voices have been recorded, the investigation would proceed "fairly quickly." "After that, if we have to analyse the sounds, that's a job that will take several weeks, but it's a job that can offer us some explanations," Vidalies told French radio.

Local prosecutor Brice Robin said initial elements could be available later Wednesday but warned "it could take several days to have all the results." A second black box, in this case recording flight technical data, has yet to be found.

Officials are hunting for answers as to why the plane entered a fatal eight-minute descent on its route between Barcelona and Duesseldorf.

No distress signal was sent and the crew failed to respond to desperate attempts at contact from ground control.

"It is inexplicable," Lufthansa chief Carsten Spohr said in Frankfurt.

"The plane was in perfect condition and the two pilots were experienced."

French police set up road blocks near the crash site, ordering all non-official vehicles to turn around, said an AFP reporter on the scene.

Just beyond lay a steep and broken landscape littered with the shattered pieces of what was flight 4U9525.

"It's a zone that is very difficult to access, very slippery. There was rain and snow overnight. So we need to secure the zone before the investigators begin their work," a spokesman for the French interior ministry, Pierre-Henry Brandet, told reporters.

"We are not in a race against time," he said. "We need to move forward methodically." The plane was "totally destroyed", a local member of parliament who flew over the site said, describing the scene as "horrendous".

"The biggest body parts we identified are no bigger than a briefcase," one investigator said.

More than 300 policemen and 380 firefighters have been mobilised for the grisly task of searching the site.

The plane was carrying six crew and 144 passengers, including 16 German teenagers returning home from a school trip.

Their high school in the small German town of Haltern was to hold a memorial event Wednesday to honour the victims.

"This is certainly the darkest day in the history of our city," said a tearful Bodo Klimpel, the town's mayor. "It is the worst thing you can imagine." Spain, meanwhile, declared three days of mourning and was to hold a minute of silence across the country at noon Wednesday. Spanish King Felipe VI cut short his first state visit to France on Tuesday minutes after it began when he heard news of the tragedy.

Opera singers Oleg Bryjak, 54, and Maria Radner, 33, were also on board, flying to their home city of Duesseldorf. Radner was travelling with her husband and baby, one of two infants on board the plane.

As the probe gathered pace, Cazeneuve said investigators were not focusing on the possibility it was a terrorist attack.

Germanwings, the growing low-cost subsidiary of the prestigious Lufthansa carrier, had an unblemished safety record and there was still no clue as to what could have caused the disaster.

Weather did not appear to be a factor in the crash, with conditions calm at the time, French weather officials said.

It was the deadliest air crash on the French mainland since 1974 when a Turkish Airlines plane crashed, killing 346 people.

Germanwings said 67 Germans were believed to have been on board, while Spain said 45 people with Spanish-sounding names were on the flight.

A Swedish third division football team failed to join the plane after changing flights at the last minute.