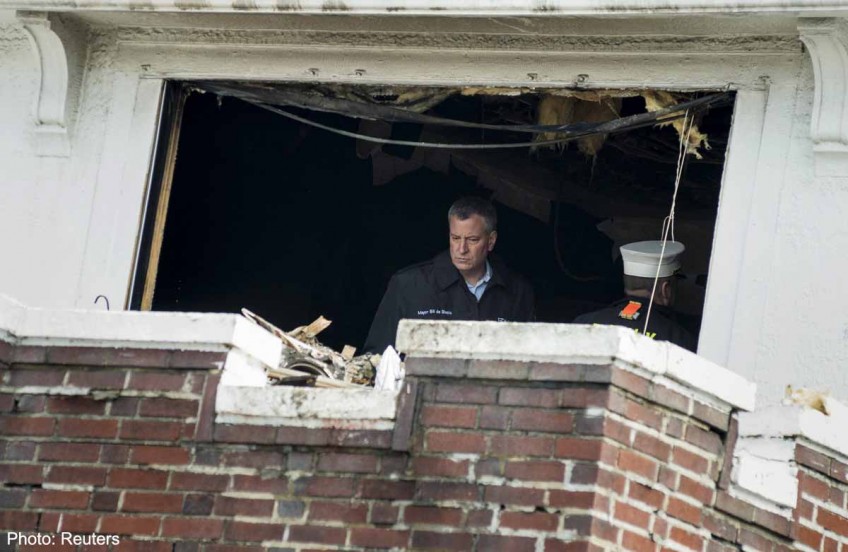 NEW YORK - Seven children from the same family died Saturday when their New York home was engulfed in flames after a portable cooker malfunctioned.

The hot plate, a small electrical heating element, may have been left on to keep food warm because of Orthodox Jewish customs that bar cooking on the Sabbath, New York Fire Commissioner Daniel Nigro said.

"This is the largest tragedy by fire that this city has had in seven years," Nigro said in comments reported by The New York Times.

A total of 105 firefighters responded to the scene.

A 45-year-old woman, the mother and another girl, 14, escaped by jumping out of windows and were being treated in area hospitals in critical condition.

"It is unimaginable what you see in there. You can literally see what was a home for a large and strong family and now it is wiped out, every room empty and burned and charred," Mayor Bill de Blasio said upon visiting the scene.

"And you can only imagine this beautiful, vibrant family 24 hours ago intact." Neighbor Nate Weber told the New York Post: "I heard a woman yelling, 'My kids are in there. Get them out, get them out!'" Weber saw children being taken from the home on stretchers and "I knew it was bad news... I just turned away. I didn't even want to look," he recalled.

The mother and the eight children were in at least five upstairs bedrooms when the fire broke out in the kitchen downstairs.

"To find a house full of children that can't be revived, I'm sure this will take its toll on our members for quite some time," CNN quoted Nigro as saying.

Officials said the father was not home at the time of the tragedy.

A man who lives next door to the burned home told the Times the family was large and loving and that some of the kids had helped neighbours shovel snow on Friday.

"They're very good people, the kids were always helping people," he told the newspaper.

Nigro said there was no sign of working smoke detectors on the first or second floors.

Because Orthodox Jewish customs proscribe the lighting of a fire or flame on the Sabbath, many families leave electrical burners running to keep food warm over the day of rest instead of using stoves.

The New York Fire Department responded to some 2,504 "serious incidents" in 2014, according to its annual report.