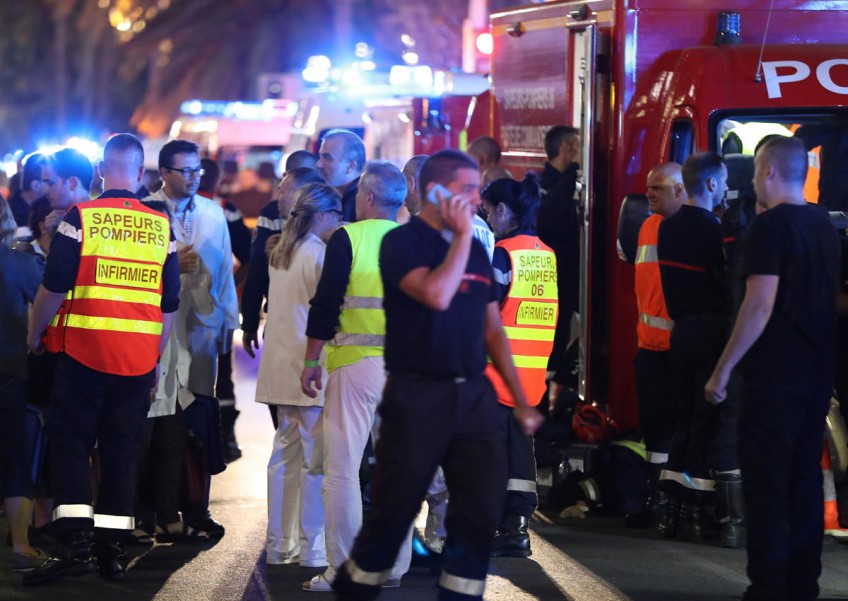 LONDON - British Prime Minister Theresa May is being briefed on the "terrible incident" in Nice and the UK authorities stand ready to assist their French counterparts, Downing Street said Friday.

The British premier's office said it was "shocked and concerned" by the scenes in the Mediterranean resort.

A truck ploughed into a crowd in the southeastern French city on Thursday, leaving at least 70 dead and scores injured in an "attack" after a Bastille Day fireworks display, prosecutors said.

A Downing Street spokesman said: "The prime minister is being kept updated on reports coming in from Nice.

"We are shocked and concerned by the scenes there. Our thoughts are with all those affected by this terrible incident on what was a day of national celebration.

"We stand ready to help any British nationals and to support our French partners."

May, who became prime minister on Wednesday after six years as Britain's interior minister, was due to head to Scotland later Friday for talks on the Brexit vote fall-out.

A Foreign Office spokesman said: "We are in touch with the local authorities and seeking more information following an apparent attack on Bastille Day celebration in Nice.

"If you are in the area, follow the instructions of the French authorities," he added, in a message to British citizens.

French local government official Sebastien Humbert told BFMTV that the driver of the truck was shot dead after barrelling down Nice's palm-lined Promenade des Anglais in what he called "a major criminal attack".

Witness Roy Calley, who said he lived 200 metres from the promenade, told the BBC there was "all hell breaking loose" and the situation was "pretty horrendous".

"It was a celebratory atmosphere, it was fun, people were enjoying themselves.

Suddenly I heard a huge, what I can only describe as maybe an explosion or a crash.

A lot of people were screaming. That was followed by what I thought were maybe gunshots."

[[nid:321581]]
#nice attack#Theresa May
SUBSCRIBE TO OUR NEWSLETTER
Your daily good stuff - AsiaOne stories delivered straight to your inbox