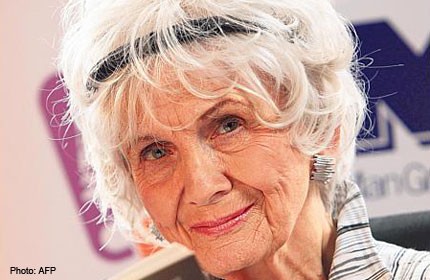 Alice Munro, 82, is the 13th woman to win the Nobel Prize in literature.

Canadian author Alice Munro, 82, received this year's Nobel Prize in literature for being "master of the contemporary short story".

The author of 16 major collections of short stories is only the 13th woman to win the award, given out 106 times since 1901 and this year worth eight million Swedish krona (S$1.5 million). The last female winner was Romania-born Herta Muller in 2009.

The announcement on Thursday was hailed by literary circles and Munro's fellow Canadian writers such as Margaret Atwood - who was herself the odds-on favourite for the Nobel Literature Prize this year, along with Japanese cult author Haruki Murakami, according to Britain's The Telegraph newspaper.

Mr Peter Englund, permanent secretary of the Swedish Academy, praised Munro's tight, ambiguous short stories, which are mainly set in a "small patch of earth" in Canada, yet provide insight into universal themes. He said his favourite book was her 2006 hybrid of personal history and fiction, The View From Castle Rock.

"No one has better deconstructed the central modern myth of romantic love, not just saying it means this and that, but showing that people can feel very, very different things about it... She is a fantastic portrayer of human beings."

In Singapore, Assistant Professor Samara Cahill, 35, of the Nanyang Technological University's division of English, said: "This is great news about female representation in the Nobel ranks... Munro is a terse observer of human loss, plangent without being sentimental. She pares down suffering to its essence and has the courage to let the small detail speak for itself - the mark of a great writer."

Singapore Literature Prize winner Suchen Christine Lim, 65, has read almost all of Munro's works and said: "She is one of the best short fiction writers and overdue this kind of recognition. There should be more women writers in the list and I'm glad the Nobel committee did not ignore her the way they ignored Doris Lessing for so long."

Though the Swedish Academy refuses to release a shortlist of contenders in the run-up to the prize, Munro was a dark horse given her preference for short stories. Past laureates have included poets and playwrights, but some feel the academy favours novelists such as last year's winner Mo Yan.

Mr Kenny Chan, 61, store director of Books Kinokuniya in Singapore, said that news of Munro's win has taken publishers and booksellers aback. "Everyone was talking about Murakami, nobody mentioned Munro."

He and other book retailers are counting their blessings that her works are in stock here.

Sales of her backlist are expected to rise, though Mr Kenny Leck, 35, co-owner of independent bookstore Books Actually, said the Nobel Prize has less of an effect on sales than the Man Booker Prize. Results of that award will be announced next Tuesday.