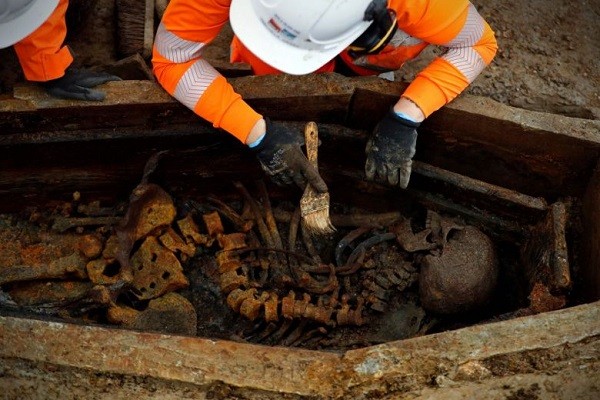 A field archaelogist uses a brush on a skeleton in an open coffin during the excavation of a late 18th to mid 19th century cemetery.
AFP

LONDON (AFP) - Tucked beside one of London's busiest railway stations, a small army of archaeologists dig through clay as they clear a burial site of 40,000 bodies to make way for a new train line.

They have already unearthed the first 1,200 skeletons from St James Gardens, a park next to the Euston terminal, which was a cemetery between 1788 and around 1853.

It is one of Britain's largest ever digs, and one of more than 60 archaeological sites that have emerged during the construction of a new high-speed rail link from London to Birmingham.

Since experts began work at Euston a few weeks ago, the site has been transformed into muddy, stepped trenches and excavations as deep as eight metres.

Dozens of archaeologists in high-visibility orange suits and hard hats swarm one section of the plot under an 11,000 square-metre roof that protects them from the rain and prying eyes.

Their work has exposed remarkably well-preserved graves, protected from water damage by the clay that characterises much of the ground in London.

In one, the stone cover was removed to reveal an intact wooden coffin, in which lay a skeleton with a twisted spine and a full set of teeth.

Such discoveries on a large scale will help researchers understand how people lived and died at a crucial stage in Britain's industrialisation.

"This is probably the biggest assemblage of skeletons from the 18th, 19th century ever excavated under archaeological conditions in this country," said senior osteologist Mike Henderson.

"When you've got such a large data set we can really start to ask some important questions... like disease prevalence, mortality rates."

So far, the team has found evidence of tuberculosis, of traumatic injuries including broken bones, proof of early dentistry - false teeth - and surgery including sawn skulls.

The state-funded HS2 rail project is highly controversial in Britain, due to its costs and the way it will plough through countryside and force hundreds of homes to be knocked down.

The initial phase from London to the central English city of Birmingham is estimated to cost £24 billion (S$42 billion) and be completed by 2026, after which it will be extended further north.

There have been demonstrations all along the route, including at St James Gardens, where a local priest chained herself to a tree in protest.

However, for archaeologists, the project has been a boon, offering funding and opportunities for new digs revealing pre-historic, medieval, Roman and industrial remains across England.

"We wouldn't make these discoveries if there wasn't some sort of development," said Helen Wass, head of heritage at HS2.

There were originally 60,000 people buried at St James, although a section of the cemetery was cleared long ago to build the station.

The current excavation team began with the section reserved for the wealthy, where the well-spaced graves are made of stone and engravings or lead plates on the coffins are testament to the occupant.

Among the prominent figures believed buried there are Matthew Flinders, who charted the coastline of Australia and gave the country its name, and the founder of Christie's auction house.

Over the coming year, the team - peaking at around 200, including those in on-site labs - will move to the "poorer side" where the graves are closer together.

After being cleaned, bagged and tested, the skeletons will be reburied on consecrated ground.

After they leave, construction will begin on 11 new platforms and tracks connecting the old Euston station with the new HS2 line.

"If we don't get it right in the field, we can't come back and repeat this," Wass said.