Small Jurassic reptile could lift off from water like a duck, study finds

Pterosaur reptiles were the first vertebrates to take to the air.

A flying reptile that lived 150 million years ago could use its wings and webbed feet to lift off from water like a duck, answering a question that has long puzzled scientists, according to a new study.

In the study led by a researcher from the Chinese University of Hong Kong (CUHK), the scientists said they analysed the structure of a small pterosaur fossil and used modelling to work out whether the animal could launch from the surface.

Michael Pittman, lead author and an assistant professor who specialises in the flight evolution of vertebrates at CUHK's school of life sciences, said the team concluded that the pterosaurs could "push up with most of their fingers and kick with their feet, which acts like a paddle because they are webbed".

"Today mallard ducks, the ones with green heads, do this too."

The study was published in the peer-reviewed journal Scientific Reports last week.

Scientists have wondered for decades how small pterosaurs, which dived for food, took off from water.

One of the authors of the recent research previously found that a big Brazilian pterosaur from the Early Cretaceous age with a wingspan of more than one metre could take off from water.

But it was not clear that a smaller one could.

"When pterosaurs float in the water, because of their body shape, they sink into the water a bit. That's not great if they spend too long in the water because waves could cover them," Pittman said.

He said that having much of the body underwater also meant taking off with just the wings could be very difficult.

So they examined a specimen with a wingspan of about 40cm (15.7 inches) preserved in marine sediment and housed at the Natural History Museum in Berlin.

It was among more than a dozen small, well-preserved pterosaurs that lived in the Late Jurassic Solnhofen Lagoons on the fringes of the Tethys Sea, in today's southern Germany.

"The wing is preserved in a mostly folded, articulated state with intervening soft tissues preserved. The feet of the specimen are preserved in an open position and pedal webbing is present," the researchers said in the paper.

Pittman said that in a pterosaur, most of the wing membrane was attached to the fourth finger, which was extremely long.

"If they put their fourth finger in the water, the wings get completely wet and they will have trouble flying," he said.

He said the technology allowed laser light to interact with fossils in a non-destructive way to show small differences in the chemistry of fossils. 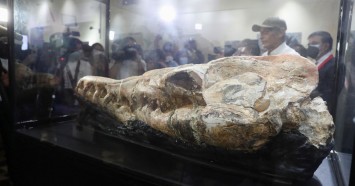 In this study, the soft tissues in the specimen were shown clearer under laser-fluorescence, providing data of the pterosaur's body structure for aerodynamic modelling, he said.

The modelling indicated that the reptiles would have been able to use their webbed feet to launch from the water, countering the high surface tension acting like a glue that could obstruct smaller species from flying.

"Our results reinforce the idea that at least some pterosaurs spent significant parts of their life in and around water," the team wrote.

Pittman said the feathered pterosaur likely lived a life similar to an osprey's, a fishing bird that hunts in the water but does not stay there for hours.