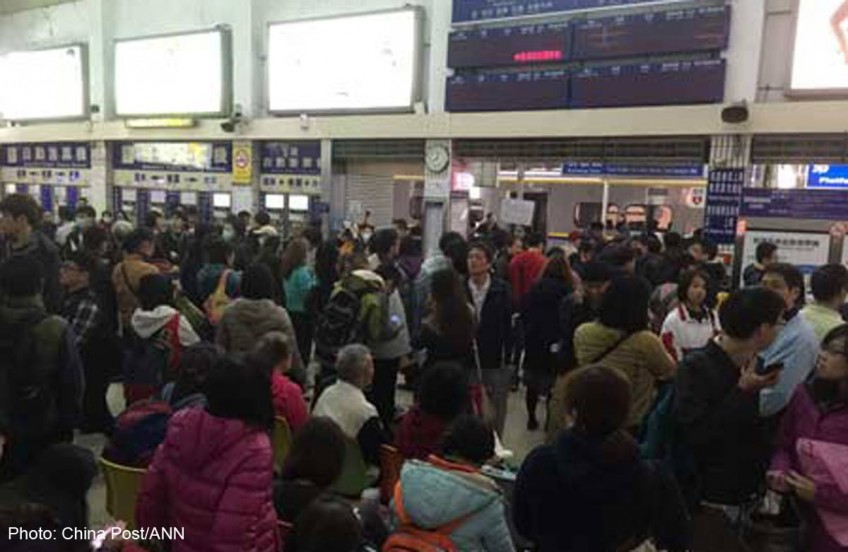 Around 6:30 a.m., northbound train No. 1134 reported a power outage while sparks flashed from an overhead cable north of Taoyuan Railway Station.

TRA transportation department Deputy Director Peng Ming-kuang said the damage indicates that the cable had been struck by lightning.

Following repairs, operations resumed on the western and eastern lines at 9:29 a.m. and 12:04 p.m., respectively.

The outage affected 15,900 people and 41 trains for a total delay time of 2,067 minutes, according to TRA estimates.

The longest service delay among short-distance trains lasted 197 minutes, while the longest delay in the long-distance Tze-Chiang Ltd. Express fleet was 245 minutes.

TRA Director-General Chou Yung-hui issued an apology yesterday and said the rail operator did its utmost to keep damage to a minimum.

At the Chungli Bus Station, redirected train commuters waited for buses in lines that stretched more than 500 meters.

Huang Chun-chi, the deputy manager at Chungli Bus, said bus passenger volume rose by 70 per cent yesterday due to the TRA delay.

Chungli Bus usually offers a bus bound for Taipei every 10 minutes - the rate was raised to one every five minutes to handle the additional volume, Huang said.

But commuters were beset by delays on the highway, too, due to traffic control for the Tour de Taiwan, an annual cycling race that passed through Greater Taoyuan yesterday.

Kao Pang-chi of the Taoyuan Government's Department of Transportation and Director Chang Dun-han of the Department of Public Information told local media they were commuters.

Stranded north of Yingge, they took a taxi to attend a ceremony marking the 2015 Tour de Taiwan but nearly arrived late due to the event's traffic control.