Solar plane off to Myanmar in epic round-the-world bid 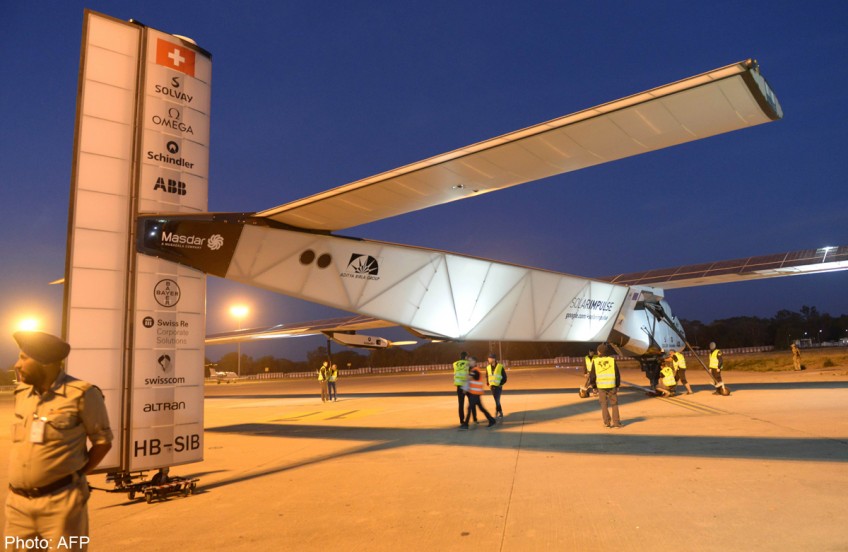 An Indian soldier from the paramilitary Central Industrial Security Force (CISF) stands alongside Solar Impulse 2, the world's only solar powered aircraft, before it takes off from Sardar Vallabhbhai Patel International Airport in Amedabad on March 18, 2015.

VARANASI, India - Solar Impulse 2 took off from the Indian holy city of Varanasi Thursday for Myanmar, its fourth flight after embarking on a landmark journey to circumnavigate the globe powered solely by the sun.

The single-seater aircraft took off at 5.22 am (2352 GMT) for what is expected to be a 20-hour journey south of the Himalayas to Mandalay, the second-largest city of Myanmar.

The plane had arrived in Varanasi on Wednesday from the city of Ahmedabad in Gujarat state for an overnight stopover.

"Mission mode on, now is time to focus for the flight ahead," Piccard tweeted along with a picture of the holy Ganges river that flows through Varanasi.

The plane's last stop in the city of Ahmedabad was mired by bureaucratic delays, with Piccard voicing his frustration over tedious paperwork.

Piccard said their flight to Varanasi had been delayed by five days thanks to administrative hurdles the team faced in Prime Minister Narendra Modi's home state.

An airport official in Ahmedabad, however, blamed the hold up on Piccard's failure to get his passport stamped when he initially landed.

The team behind Solar Impulse 2, which has more than 17,000 solar cells built into its wings, hopes to promote green energy with the circumnavigation attempt.

Ridiculed by the aviation industry when it was first unveiled, the venture has since been hailed around the world, including by UN chief Ban Ki-moon.

Muscat was the first of the 12 planned stops on the plane's maiden journey around the world from Abu Dhabi, with a total flight time of around 25 days spread over five months.