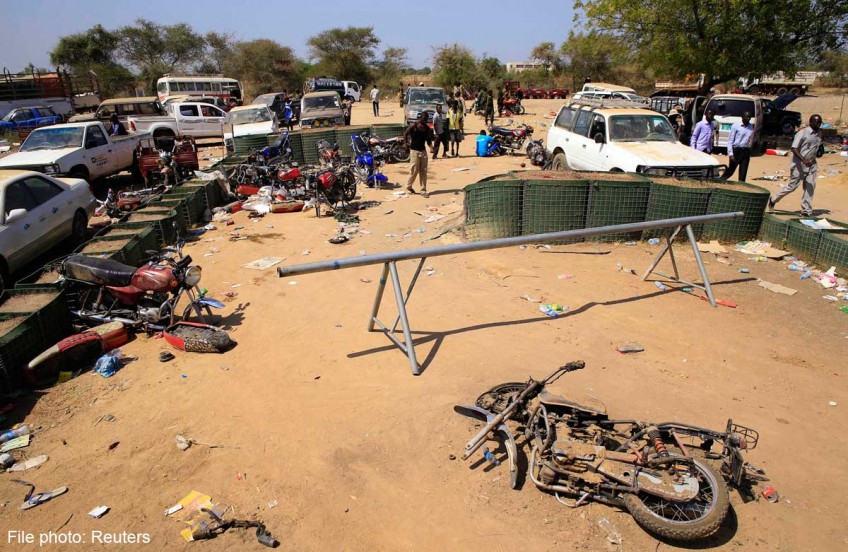 Damaged vehicles are pictured near the entrance of the United Nations camp, after a gun fight between rebels and army soldiers in Bor, 180 km (108 miles) northwest from capital Juba December 25, 2013.

ADDIS ABABA - South Sudan's rebels indicated Wednesday that there would be no imminent truce in the country unless the government freed a group of suspected rebels currently being detained.

A rebel spokesman said the 11 detainees, who were arrested in the capital Juba after fighting broke out more than three weeks ago, should be set free so they can take part in the peace talks under way in Ethiopia.

"Our colleagues must be released so that they come and participate," rebel spokesman Yohanis Musa Pauk told reporters in Addis Ababa.

"You cannot go to negotiations while there are some people being detained. You need to release them so that they now have a positive role in the negotiations. We are just waiting for the release of our detainees, when they release them very soon we will sign the cessation of hostilities agreement," he added.

The fighting began on December 15 as a clash between army units loyal to South Sudan's President Salva Kiir and those loyal to ex-vice president Riek Machar, and has escalated into war between government troops and a loose alliance of ethnic militia forces and mutinous army commanders.

The government is currently holding 11 of Machar's allies, many of them senior figures and former ministers, but has been under pressure from IGAD - the East African regional bloc which is trying to broker a truce - as well as Western diplomats to release them as a goodwill gesture.

The government, however, appears to have so far resisted the demands and maintains the detainees should be put on trial for their role in what the president says was an attempted coup.

The rebel spokesman accused the government of "lying" to IGAD over the detainees by sending mixed signals, and asserted that the rebel side was acting in good faith.

"We came here for peace, not just for talks, we came here to sign an agreement," he said.