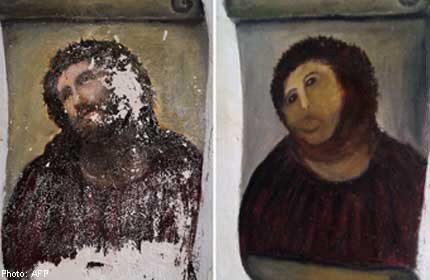 MADRID - An 82-year-old Spanish woman whose botched restoration of a painting of Christ made her a global laughing stock is to reap nearly half the riches from worldwide merchandising of the monkey-like image.

Cecilia Gimenez took it upon herself a year ago to fix up Ecce Homo (Behold the Man), a flaking, century-old fresco of Christ painted on a pillar in a church in Borja, northeastern Spain.

The touched-up result resembled a pale-faced ape with cartoon-style eyes and mouth and a crooked smudge for a mouth; so bad it became an instant Internet hit, imitated and pilloried around the world.

In the past year, some 57,000 people have descended on the church, Santuario de Misericordia, to be photographed with the artistic disaster, according to a charitable foundation running the church.

The church foundation, owned by Borja town hall, started charging one euro ($1.40) for each visitor to help pay for the upkeep of the painting and to finance its charitable work.

But the big money could come from selling the rights to use the image on anything from bottles of wine to coffee mugs and T-shirts.

Under a deal being signed Wednesday, Gimenez gets 49 per cent of the profit from marketing of the image with the rest going to the foundation, Borja deputy mayor and cultural chief Juan Maria Ojeda told AFP.

No longer mocked, the elderly artist has just held a well-received exhibition of her own paintings in Borja but has no wish to get rich herself, said her lawyer, Antonio Val-Carreres.

"All the profits will go for charitable uses by the foundation and by Cecilia," he told AFP.

"That's very important. It should be made clear that no-one wants to make money out of this situation."

Already, several international companies had shown interest in using the infamous image, he said, declining to identify them before an agreement was reached.

For the woman renowned as perhaps the world's worst art restorer, it is a dramatic change in fortune.

"Everyone seems to be happy now," she told the local paper, Heraldo de Aragon.

Not everyone, in fact.

Descendants of Elias Garcia Martinez, the artist who painted the work just over a century ago, are upset that the disfigured painting will remain intact instead of being returned to its original state.

"That is the main disagreement," said deputy mayor Ojeda, who had met recently with one of the family members.

"Some of them want a restoration which is probably impossible now and some are just asking for it to be removed from where it is and put somewhere else," Ojeda added.

Both the town hall and Gimenez's lawyers said they were ready to extend the image rights contract to the original artist's descendants if they had a change of heart.