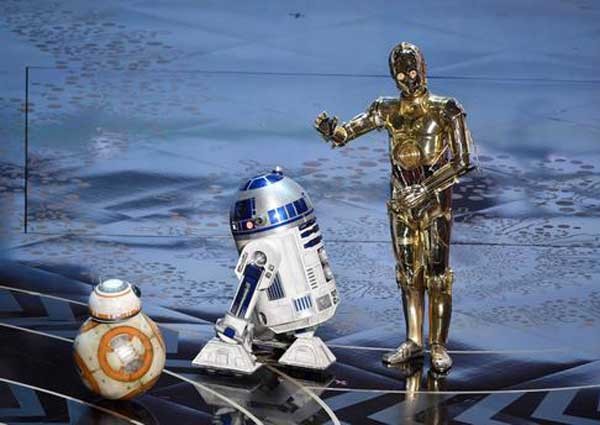 From left to right, BB-8, R2-D2 and C-3PO from 'Star Wars' appear onstage during the 88th Annual Academy Awards at the Dolby Theatre on February 28, 2016 in Hollywood, California.
AFP

LOS ANGELES - An R2-D2 unit used in the filming of several "Star Wars" movies has sold for almost US$3 million (S$4.1 million), a southern California auction house said on Thursday.

Luke Skywalker's droid sidekick was put together from parts used in the filming of the original 1977-1983 trilogy and two of the 1999-2005 prequel films, Profiles in History, based near Los Angeles, said in its catalog.

While the 43-inch (109 centimeter) character played largely by English actor Kenny Baker is known for his tenacious loyalty and snarky sense of humour, there are internal mechanics in the aluminium, steel and fiberglass unit sold on Wednesday.

The unidentified buyer nevertheless shelled out US$2.76 million, making it the most expensive lot at a three-day auction of Hollywood memorabilia that included numerous props from the Lucasfilm franchise, raising a total of US$14 million.

Skywalker's lightsaber from the first two movies, "A New Hope" and "The Empire Strikes Back," fetched US$450,000 while Darth Vader's helmet from the original film sold for US$96,000.

A collection of 23 spaceships from space series "Battlestar Galactica" and "Buck Rodgers" made $1.8 million dollars while the iconic illuminated dance floor from "Saturday Night Fever" went for US$1.2 million.

Leonardo DiCaprio's costume from Titanic (1997) and the sword wielded by Arnold Schwarzenegger in "Conan the Barbarian" (1982) went for US$192,000 each.