Still waiting for flat, jobs - but hopeful for the future 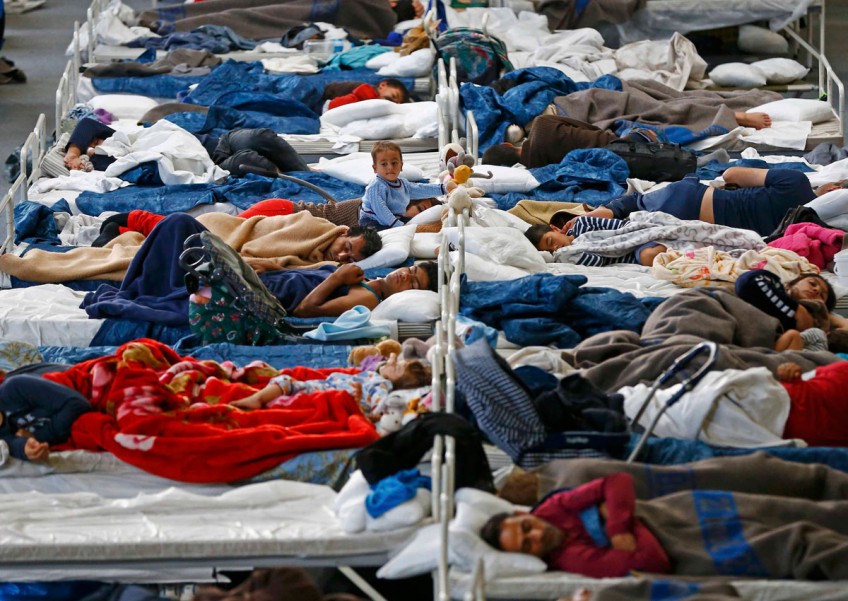 FRANKFURT - Mr Salam Ali closes his eyes and sighs as he grumbles about his futile efforts to find a flat in Frankfurt's tight housing market.

"It's seven months now. It's the same. Whenever I ask on the phone if the flat is still available, the owners says yes.

"And when I say the Jobcenter will pay for it, they then say, it is not free," he says, scratching his goatee.

Life in Europe's richest economy is not yet what the 21-year-old Syrian migrant had hoped it would be when he fled Damascus, via Egypt and Libya, 16 months ago with his mother Lina, younger sister Esraa and teenage brother Nouredin.

It has been a circuitous route for Mr Salam and his family to the four-storey building owned by the state-run Jobcenter that is now home to 52 asylum-seekers from trouble spots such as Eritrea, Ethiopia, Afghanistan and Syria.

Mr Salam's boat landed on an island off Italy and the family travelled to Milan, where they hired a car to Giessen refugee camp near Frankfurt to rejoin his father Ashraf and youngest brother Ahmed.

The Ali family are among around 10,000 "official" refugees estimated to be living in Frankfurt since the end of the 70s, when conflicts in Iran, Afghanistan, the Balkans and Eritrea broke out.

Germany's Migration Office says 202,834 filed for asylum there last year, nearly 60 per cent higher than 2013. A third were accepted, a third rejected and the remainder opted out for other countries.

The same ratios will likely prevail this year, when 159,927 filed for refugee status in the first-half alone before Germany was flooded by an influx of asylum-seekers early this month, forcing it to shut its borders two weeks later.

The Ali family have a unit of about 120 sq m, with four rooms and a kitchen, in a former student dormitory tucked away in the city centre's upmarket Westend quarter. The building has seen better days and was to be torn down but was refitted with heating and water early last year to absorb the refugees. Old bikes, a disused armchair and a baby stroller clutter the entrance hall.

"We have had no problems here so far. The neighbours, in fact, came and asked if they could help when they learnt refugees would be housed here," says Mr Jens Krueger, who mans the administrative office on the first storey for charity group Caritas.

Sitting on their threadbare sofa, the Ali family tell their story.

Mr Ashraf is the only one who has to renew permission to stay every six months, still awaiting the refugee status given to the rest of his family. Holding a plastic bag filled with potatoes, parsley, chicken and bread bought at a nearby store, he blames his uncertain status on his fingerprints. "It's because of this," pointing to his thumb.

Mr Ashraf, 47, is part of a diplomatic tussle within the European Union (EU). After landing in Lampedusa, Italy, in 2012 with Ahmed, then nine, and hundreds of other refugees, he was fingerprinted under the EU's Dublin rule, which requires a migrant to claim refuge in the country where he first set foot.

But the bloc's free border allowed him to go to other countries with better welfare provisions, like Sweden. He and his son stayed there for five months until fingerprint records revealed Italy was their country of first arrival. The two were told to return to Italy and to leave Sweden. They headed instead to Germany, which waived the Dublin rule last month.

But times could get tougher for the Ali family. Germany is considering cutting the allowances for those refugees who first set foot elsewhere in Europe. Now, Mr Ashraf gets €360 (S$570) a month, Mrs Lina €360, Miss Esraa €320, Nouredin €280 and the youngest child €270. The amounts are based on the same minimum dole-outs for the poorest of Germany's citizens.

From the money, they pay their own German classes, discounted at €10 a month.

"I only stay in my room studying German. I need to improve my German so I can acquire a skill," Mr Salam says.

Pregnant Lina, 39, whose baby is due in December, smiles and shrugs as she ponders the future. "We have to find a flat. It is very expensive here. We have to wait and wait."

Twenty-year-old Esraa looks forward to her new life, though she misses friends and her Damascus home, flattened by a 2012 bomb. "Everything so far has been good here. I want to study art and be a fashion designer."

If one looks at a map, Germany seems an unlikely destination for refugee boat arrivals - it's a long way from the Mediterranean.

But they head in growing numbers to Europe's biggest economy, lured by its social welfare benefits. Their entry point is the state of Bavaria in the south, which shares borders with Austria on its eastern flank.

About 104,000 asylum-seekers entered Germany last month, the Interior Ministry said. Of these, 36,422 formally applied for refugee status - 106 per cent higher than in the same month last year.

Germany sends them to 16 federal states, based on a quota that takes into account tax revenues and population. The states then allocate them to towns and cities based on similar criteria.

Those who arrived in Bavaria's capital, Munich, earlier this month were absorbed mostly by North-Rhine Westphalia, Germany's biggest state in terms of population.

The state had no choice. The refugee quota system requires it to absorb 21.24 per cent of those applying for refugee status. Bavaria comes next with a 15.33 per cent quota.

When Hesse state's first transit point in Giessen breached the 6,000-bed capacity at its refugee camp this month, Frankfurt and other cities had to absorb the overflow. There are now about 15,500 refugees in Giessen and its outlying ad-hoc transit camps.

It would normally take four to eight weeks to process refugees before a decision on official status is made at the national level. Since the exodus to Germany last year, the average was about seven months - it is now 5.3 months. The refugees await their fate in sports stadiums, school gymnasiums, abandoned buildings and even containers converted into flats. Those rejected normally appeal to the courts, which can take up to two years.

An official refugee is given about €400 (S$632) a month, a nationwide social welfare benchmark, and a housing allowance until he or she finds a job. If a refugee's income then falls short of the benchmark, extra social aid can pay for health insurance or top up for housing.

The Munich-based Ifo research institute estimates annual costs of at least €10 billion, based on the interior ministry's forecast of at least 800,000 asylum-seekers this year.