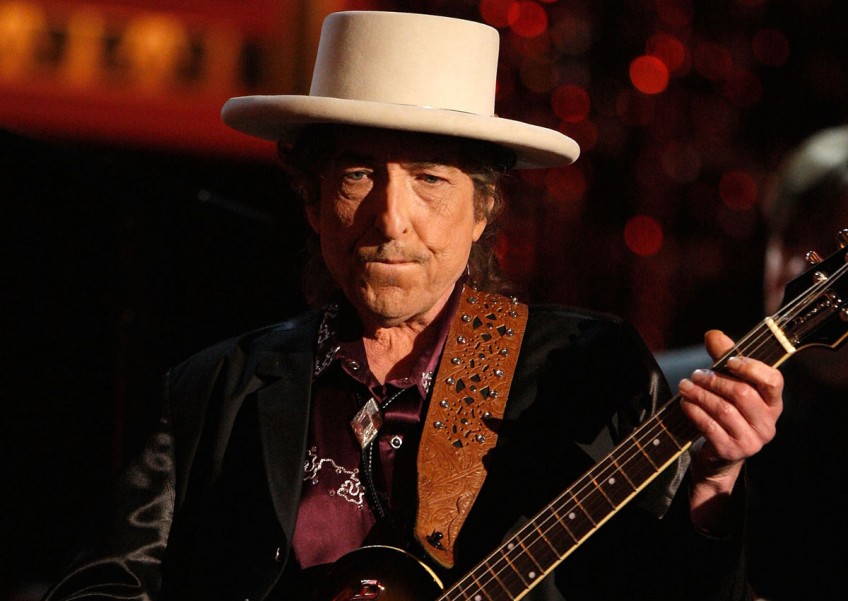 "Whoever it is that listens to my songs owes me nothing," Bob Dylan said in a 1966 interview, half a century before winning the Nobel Literature Prize last year.

These words come as an ironic reminder for the Swedish Academy, which awards the prestigious prize.

The rock enigma snubbed the Nobel ceremony in December because of "pre-existing commitments", and has given no indication of whether he plans to deliver a traditional Nobel lecture by the June 10 deadline.

The lecture is the only requirement to receive the eight million kronor (S$157,600) that comes with the prize.

It can take nearly any form including a short speech, a performance, a video broadcast or even a song, but must be held within six months of December 10, the date of the Nobel prize ceremony and the anniversary of the death of the prize's founder Alfred Nobel.

Dylan is set to perform in Stockholm on April 1-2 and in the southern city of Lund on April 9.

Speculation has mounted that he may hold his lecture during his visit to the Scandinavian country, though the Academy has repeatedly said it has not heard a word from Dylan.

"No phone conversation has taken place with Bob Dylan these last months," Sara Danius, the permanent secretary of the Swedish Academy, said in a blog post on Monday, adding Dylan knows he has until June 10 to deliver the lecture.

"What he decides to do is his own business," Danius said.

Dylan will however remain the 2016 Nobel literature laureate regardless of whether he holds his lecture or receives the money.

"As far as the Swedish Academy is concerned, it's clear in any event that the 2016 Nobel laureate in literature is Bob Dylan and no one else," Danius stressed.

'Are my songs literature?'

When the 75-year-old, who kept silent for weeks after he was announced as the Nobel literature laureate in October, was asked at the time why he did not respond to the Academy's calls, he told the Daily Telegraph: "Well, I'm right here." The first songwriter to receive the prize later sent a thank-you speech that was read aloud during the ceremony in Stockholm, but he didn't choose a person to accept the award in his place.

In an exceptionally humble speech, Dylan apologised for not being able to attend the event and expressed surprise over being chosen as a laureate in the league of authors like Ernest Hemingway and Albert Camus.

"Not once have I ever had the time to ask myself, 'Are my songs literature?'" his speech read.

"If someone had ever told me that I had the slightest chance of winning the Nobel Prize, I would have to think that I'd have about the same odds as standing on the moon," his speech added.

'Not Dylan's cup of tea'

According to Maria Schottenius, a literary critic and columnist at Swedish daily Dagens Nyheter, Dylan's silence and distance from the Nobel prize has hurt the Swedish Academy's pride.

"It was surely a miscalculation ... even if the Swedish Academy doesn't select award winners based on how well they perform in royal environments," she told AFP.

But Dylan does care about the Nobel, Schottenius believes. It's the glitziness of the ceremony, attended by Swedish royal family and politicians, that intimidated the rock star.

"(A) prize from the king's hand, tailcoat, the world's finest party with a long lavish televised dinner... not his cup of tea," she said.

Several other literature prize winners have skipped the Nobel ceremony in the past for various reasons. Nobel laureate Doris Lessing (2007) did not attend because of her advanced age, Harold Pinter (2005) because he was hospitalised and Elfriede Jelinek (2004) due to her social phobia.

Each of these winners performed their lectures that were either delivered to Stockholm or read aloud abroad.