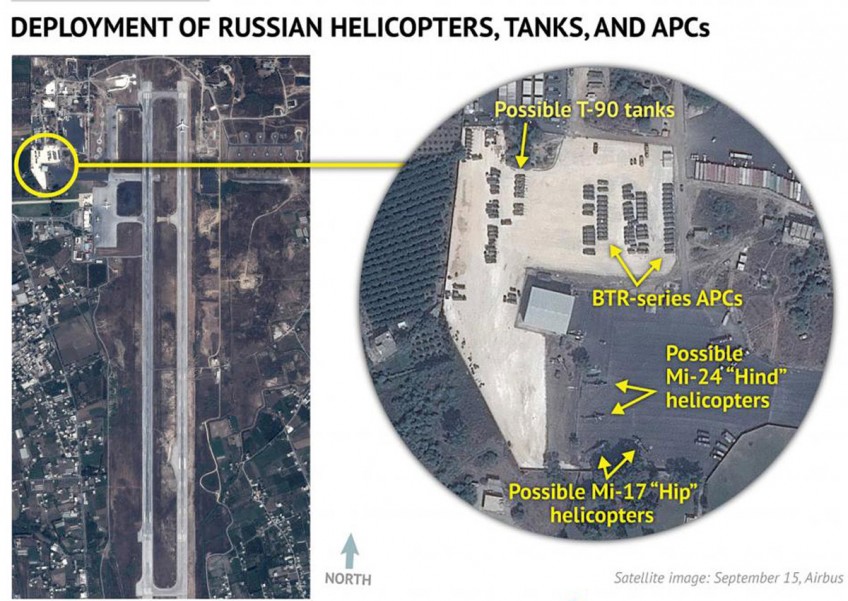 An Airbus Defence and Space satellite image courtesy of Stratfor, a geopolitical intelligence and advisory firm in Austin, Texas, shows the air base at Latakia, Syria on September 15, 2015.
Reuters

"The weapons are highly effective and very accurate, and hit targets precisely," the source said in response to a question about Russian support. "We can say they are all types of weapons, be it air or ground."

The source said the army had been trained in the use of the weapons in recent months and was now deploying them, declining to give further details other than saying they were "new types."

Syria's Foreign Minister Walid al-Moualem said on Thursday Russia had provided new weapons and trained Syrian troops how to use them, without saying when or naming any specific systems.

He told state television the government would be prepared to go further and ask Russian forces to fight alongside its troops if needed - though he said there were no such soldiers there now.

The Russian government said on Thursday its military support for Damascus was aimed at fighting terrorism, safeguarding Syria's statehood and preventing a "total catastrophe" in the region.

It includes a larger Russian military presence on the ground in Syria, where President Bashar al-Assad has faced increased pressure this year from rebels fighting to topple him, but its full scope and intentions remain unclear.

Washington, which wants Assad gone from power, has said it believes Russia is undertaking a significant military buildup which could exacerbate the war.

Pentagon spokesman Peter Cook condemned any new Russian assistance to Syrian saying it would be "counterproductive to the ultimate solution in Syria, which we think is a political and diplomatic solution, not a military solution."

The United States, along with Saudi Arabia and Turkey, have supported insurgents battling to unseat Assad, whose foreign military backing has so far come mostly from Iran and its Lebanese ally Hezbollah.

A US-led coalition is also bombing Islamic State militants in Syria and Iraq, raising the prospect of a potential clash between US and Russian air forces.

In a possible sign of a newly assertive posture by Assad, the Syrian air force launched heavy air strikes on the Islamic State-held city of Raqqa, an important base of operations for Islamic State in Syria often targeted by the US-led coalition.

The air strikes, reported by activists in Raqqa, were not confirmed by the Syrian military.

The UK-based Syrian Observatory for Human Rights said at least 18 people were killed in the raids that hit several areas in the city and its outskirts, including a maternity hospital.

The government, which by Assad's own admission faces a military manpower problem, is seeking to shore up control over the cities of the west after losing much of the rest of Syria to an array of insurgents including Islamic State.

The Obama administration said Wednesday it was considering how to respond to a Russian proposal for military talks over Syria, which may be about "deconfliction" - ensuring that US and Russian aircraft do not come into conflict in Syria.

Russia says Assad should be part of international efforts to fight Islamic State. The United States believes he is part of the problem and rejects that idea.

The war has already killed 250,000 people. Four million people have fled Syria and almost twice as many are displaced inside it. Tens of thousands of Syrian refugees have been arriving in Europe, part of the biggest migration crisis to hit that continent in decades.

The strikes hit close to at least four Islamic State offices, including one used by its self-appointed religious police force, said an activist in Raqqa who was contacted via the Internet and declined to be named for security reasons.

Islamic State imposed a curfew in two parts of the city.

An activist group called Raqqa is Being Slaughtered Silently said on its Twitter feed: "There is news about a large number of martyrs and wounded."

The Syrian Observatory for Human Rights, which reports on the war using a network of sources on the ground, said government forces had recently started using new weapons including guided air-to-surface missiles.

"There are modern weapons that the regime didn't previously have, be they rocket launchers or air to ground to missiles," said Rami Abdulrahman, director of the Observatory.

The prime minister of Israel, which has mounted its own air strikes in Syria against both Syrian military and Hezbollah targets, is due in Russia next week for talks with President Vladimir Putin on the expanding Russian military presence.

Reuters has previously reported on US assessments that Russia has sent about 200 naval infantry forces, battle tanks, artillery and other equipment to an airfield near Latakia.

US officials said on Wednesday the United States had identified a small number of Russian helicopters at a Syrian airfield.

Russia has been sending about two military cargo flights a day to an air base at Latakia on the government-controlled Syrian coast, US officials say.

Lebanese sources familiar with military and political developments in Syria have also previously told Reuters that Russians are taking part in military operations in the country. Syrian officials say the Russian military presence is restricted to experts.

Hezbollah has deployed directly in combat, while Iran has mobilized militias and sent military advisers.