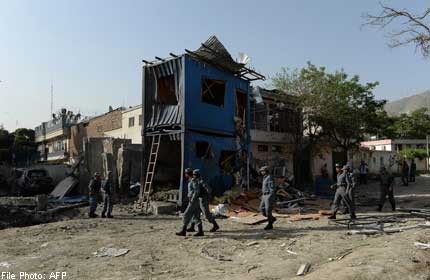 An insurgent attack on a road construction workers' camp in Karukh district in the western province of Herat left nine workers dead overnight.

"The Taliban attacked their camp along the Herat-Badghis road while they were asleep last," Abdul Rauf Ahmadi, provincial police spokesman, told AFP.

The workers were employed by a government-owned road construction company, he said.

A provincial governor spokesman confirmed the deaths, blaming "enemies of Afghanistan", a term used to refer to the Taliban.

A roadside bomb also killed five civilians, including women and children, and wounded three others in the southern province of Helmand province on Saturday morning.

They were on their way to Lashkar Gah, the provincial capital, for shopping, he said.

IEDs are the Taliban's weapon of choice in their battle against the US-backed government and foreign forces, but they often kill and wound civilians.

According to recent United Nations report, civilian casualties in the Afghan war rose 23 per cent in the first half of this year due to Taliban attacks and increased fighting between insurgents and government forces.

The increase reversed a decline in 2012 and raised questions about how Afghan troops can protect civilians as US-led NATO soldiers withdraw from the 12-year war.