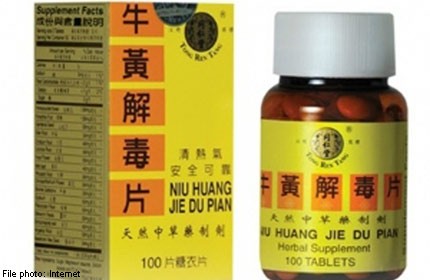 Tongrentang, a traditional Chinese medicine maker based in Beijing, said it has not registered its medicine Niu Huang Jie Du Pian for sale in the United Kingdom or Sweden, nor has it exported medicine to those countries.

The announcement on Thursday came after the Medicines and Healthcare Products Regulatory Agency in UK issued a statement on Monday that the Swedish National Food Agency reported it had found "extremely high" levels of arsenic in Niu Huang Jie Du Pian.

The medicine, containing realgar, a mineral consisting of arsenic sulphide, is used in traditional Chinese medicine to treat inflammation of throat, gingivitis and mouth sores.

According to the Chinese pharmacopoeia, realgar relieves malaria and provides relief from insect and snake bites.

Niu Huang Jie Du Pian, and two other Chinese medicines, are unlicensed in the UK, said the MHRA, who warned people to be cautious when buying it on the Internet.

"The adulteration of ethnic medicines with heavy metals is a significant international problem," the agency said.

In May, Tongrentang announced it would clarify that its medicine to treat children's cold and fever symptoms is safe. This came after a doctor said on his micro blog account that the medicine uses cinnabar, a poisonous mineral, to calm children down.

Cinnabar has been used for medicinal purposes for more than 2,000 years in China, and using it according to specifications is safe, the company said on May 24.