Tennis Australia backflips on 'Where is Peng Shuai?' T-shirt ban

Fans at the Australian Open can wear "Where is Peng Shuai?" T-shirts as long as they are peaceful, Tennis Australia chief Craig Tiley said, amid criticism of the grand slam organisers' earlier stance on the issue.

The stunning backflip comes after Australian authorities and security at Melbourne Park ordered two spectators to remove their T-shirts and a banner with the message "Where is Peng Shuai?" Tennis Australia said it confiscated them because they were political, but has now softened its stance.

"Yes, as long as they are not coming as a mob to be disruptive but are peaceful," Australian Open tournament chief Craig Tiley told AFP on Tuesday after a backlash over the grand slam's controversial stance.

WTA fall tournaments in China remain up in the air and updates on Peng Shuai continue to raise concern.

Martina Navratilova was among several tennis greats to accuse Australian Open organisers of "capitulating" to China over the banning of T-shirts supporting Peng Shuai.

Navratilova, who won 18 grand slams during her storied career, said on Tennis Channel: "Sports has always been kind of on the forefront of social issues, pushing them forward, and we are going backwards I feel. 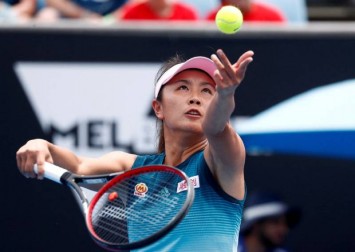 "We've had the issue with Peng Shuai, and now there were fans at the tournament watching Naomi Osaka practise, they weren't even on the main court, they had 'Where is Peng Shuai' on their T-shirt and they were told to cover it up."

There has been significant concern for the well-being of the former world doubles No 1 among the international tennis community and human rights groups since early November, when Peng disappeared from public view after taking to social media to accuse former vice-premier Zhang Gaoli of sexual assault.

She has since been seen several times, including giving a television interview in Singapore, but her situation remains unclear.

Peng supporters in Australia said they were planning to hand out 1,000 "Where is Peng Shuai?" T-shirts at Melbourne Park this week after raising more than A$10,000 (S$9,602) on a GoFundMe page.

The Women's Tennis Association suspended tournaments in China due to its concerns over Peng's safety and Tiley said Tennis Australia backed their stance.